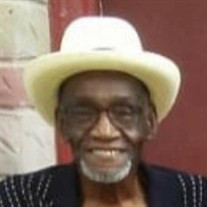 OSCAR VINES, son of the late Willie Vines and Lilly Vines, was born on June 17, 1940 in Conetoe, North Carolina. He departed his life on May 31, 2021 after a lengthy illness. Oscar received his education in Conetoe, North Carolina public schools. He moved to Baltimore at the age of 16. He was employed by Maryland Drydock in the early 1960s and worked there until they closed. He also worked in Washington, D.C. in a new occupation until he retired. He met Essie Mae in the early ’60s, and they married in 1975. Oscar loved and adopted Essie Mae’s three sons James, Dennis, and Paul. He accepted Christ into his life and joined Mt. Calvary Free Will Baptist Church where he was baptized in 2002. He enjoyed fixing cars, working in his garden, and entertaining family and friends. Oscar was liked and loved by many and always had a good story or joke to tell. Oscar will be truly missed by all that knew him. Oscar was preceded in death by his wife Essie Mae James-Vines, his brother Johnny Vines, sister Lossy Mae Vines, two sons Dennis James and James Morris, and one grandson Jule Johnson. He leaves to cherish his memory: one son, Paul James; three brothers, Willie Jr. (Zetna) Vines, Earnest (Roena) Vines, James (Beverley) Vines; grandson, Gerard Morris; five granddaughters, Samantha Brogden, Sharron Kinard, Keyshawn James, Arika James and Anita James; two sisters-in-law, Francis Bryant and Nancy Bryant; twelve great-grandchildren; goddaughter, Sherry Brown; and an abundance of nieces, nephews, other relatives, and a special friend, Junior Jenkins.

The family of Oscar Vines created this Life Tributes page to make it easy to share your memories.

OSCAR VINES, son of the late Willie Vines and Lilly Vines, was...

Send flowers to the Vines family.