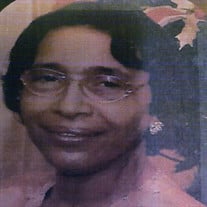 Novella Carr (Horsey) was born in Baltimore, Maryland on February 29, 1944, to John and Martha Carr. Jesus embraced Novella Carr Horsey into his loving arms and led her to a peaceful journey home on Monday, January 24, 2022, at the age of 77. Novella attended Baltimore City Public Schools. She later enrolled in Business School and mastered the skills of typing and stenography. Novella worked for the State of Maryland and retired after more than 33 years of service. She was married to Solomon Horsey. Novella was the mother of six children: Timothy Carr, Dorcas Carr Lyons, Michael Carr, Ellice Carr, Robert Becoat, and Reynard Becoat. Novella was a leap year baby and only had a true birthday every four years. Novella older sisters Mary and Alice cared for her as a child. Novella began her spiritual journey at New Fellowship Christian Community Church with her mother. She was the church secretary and sang on the choir. She met and married her husband Solomon Horsey at New Fellowship. Saul, as she lovingly called him. They were married for 31 years. Novella and Solomon loved going to church, watching movies, and taking long rides. Later, Novella and Solomon became members of God's House of Worship/Ministries Inc. She was the Church Mother. Mother Horsey, as she lovingly called, enjoyed worshipping with her church family. Her favorite Bible Scriptures are: 1. Psalm 37:25--- I have been young, and now am old; Yet I have not seen the righteous forsaken, Nor His descendants begging bread. 2. Psalm 1:1-6 Mother Horsey loved God and knew and understood God's words. Also, in her spare time she enjoyed listening to gospel music, jigsaw puzzles, and playing checkers. Novella enjoyed her talks and visits from her children: Timmy, Dorcas, Ellice, Robert, and Michael. She loved to reminisce and tell jokes with them. Nana as she was lovingly called, like to go out and have fun. Her fun time partners were great grandchildren: Makai, Malia and Myana. She would attend school functions, go to Chuck E. Cheese, play Wii sports bowling, and bible trivia. In addition, she loved to play dolls with her great granddaughter Mahogany from New York. Nama had a special relationship with her granddaughter Tinika. Tinika selflessly provided countless hours of personal care for her grandmother. Novell Horsey was preceded in death by her parents Martha and John Carr, her son Reynard Becoat, grandson Acie Lyons Jr., and her siblings: Mary, Helen, Alicem Ruthie, and Norris. Novella leaves to cherish her memory: Husband-Rev. Solomon Horsey. Sons Timothy Carr (Charnette), Michael Carr, Robert Becoat. Daughters: Dorcas Carr Lyons, Ellice Carr, and Elaine Horsey and a host of family and friends, and love ones.

Novella Carr (Horsey) was born in Baltimore, Maryland on February 29, 1944, to John and Martha Carr. Jesus embraced Novella Carr Horsey into his loving arms and led her to a peaceful journey home on Monday, January 24, 2022, at the age of 77. Novella... View Obituary & Service Information

The family of Novella C. Horsey created this Life Tributes page to make it easy to share your memories.

Novella Carr (Horsey) was born in Baltimore, Maryland on February...

Send flowers to the Horsey family.