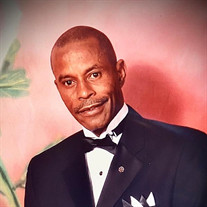 Norris Michael Johnson, was born on November 5,1949 to Marion Martin and Norris Bernard Johnson. After a long illness, Norris Michael Johnson departed this life on December 13, 2021. Norris completed his education in the Baltimore City Public School system, graduating from Frederick Douglass High School in 1970. He attended Coppin State University, where he pledged and was a member of the Kappa Alpha Psi fraternity. While attending Coppin, he was commissioned to recreate the Coppin State sign, which can still be found at the entrance and bridge of Coppin’s Campus. He graduated from Coppin State University with a Bachelor of Arts and Science degree majoring in Social Science in 1988. Upon graduating, Norris worked at March Funeral Home, initially as a funeral director, but over time taking on various roles and responsibilities. He worked at March Funeral home for many years. After leaving March Funeral Home, Norris began to work for the Department of Social Services in 1999, where he enjoyed helping people, until he retired in 2012 due to having a major stroke. Shortly after college, Norris had his oldest son, Norris Anthony Johnson and Norris proudly raised his son as a single father. Years later, Norris had his youngest son, Javon Johnson. On January 6, 2014, Norris married Bernadette. Even Though, Norris was a people person, he also liked family life. He enjoyed cooking and watching football, but his favorite thing to do was to go to a buffet. His thoughts were why go to a restaurant and enjoy one meal when you can eat at a buffet and enjoy a variety of meals. I will truly miss him and his memories will always be in my heart. Norris Michael Johnson was a duly member of the Masonic Mason Lodge. He invented and patented his own coffin. He was outgoing, always the “life of the party” and known amongst his peers as the “Best Dressed”, as he was always dressed sharp and clean. Norris was the fifth of seven children. Five of his siblings preceded him in death: His sister Bernadette “Cookie” Collins, twin sisters Norrline Lee and Morrline Harden younger brother Garth “Baby Brother” Johnson , youngest sister Princess Johnson also his surviving siblings Dawn Clayton Queen and Paulette Johnson. Norris leaves behind to mourn and cherish his memory: his beloved wife Bernadette Johnson, his two sons Anthony and Javon Johnson,and his two step children Arthur and Aeisha Johnson. He is also survived by his three grandchildren Deja Johnson, Kamarie Johnson, and a host of other relatives and friends.

The family of Norris Michael Johnson created this Life Tributes page to make it easy to share your memories.

Norris Michael Johnson, was born on November 5,1949 to Marion...