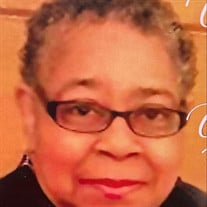 Norma Lee David, aka Norma Lee, the black Marilyn Monroe, was the fifth daughter of Norman and Elizabeth Covington. Born June 25, 1949, in Baltimore County, she was raised, with her 7 siblings, in Turner Station. With all the children being between 18-30 months apart, they were a very tight knit family. On Sunday, May 9, 2021, she went on to heaven to be reunited with, the majority of , her siblings, and the love of her life, her husband, Alexander David. They married on June 26, 1976, but he preceded her in death in 1986. Everyone knew, her children and granddaughters were one of her life's greatest highlights, but throughout the years she continued to love and long for the day that she and Alexander would be reunited. Norma received her education in the Baltimore County Public School System and graduated from Dundalk High School. After graduation, and for the following 14 years, she worked in Baltimore City Hospital, as a nursing assistant. In 1984, she began a new career at Greater Baltimore Medical Center (GBMC). There she worked in the operating room as a Central Sterile Processing Technician, until her retirement in 2007. Norma was a loyal member of Pleasant Zion Baptist Church, and loved the Lord. One thing she genuinely enjoyed, was volunteering on Wednesdays at the food pantry. That was her "Happy Hour." As a naturally friendly person, she was notorious for starting conversations with anyone, whether she knew them or not. Norma was also an avid reader. She was proceeded in death by her parents, husband, and five siblings: Dorothy Smith, Robert "Morris" Golightly (Linda Golightly), Mattie Lampkin, Cynthia Covington, and Michael Covington (Sheila Covington). She leaves to celebrate her life: her two children, Armand and Tiffany David; grandchildren, Ayanna and Aniya Harrell, Aaliyah David, and Madison Curbeam; two sisters, Carolyn Blue (Earl Blue), and Jannie Smith (James "Sonny" Smith); her dearest and best friend, Darnell Brown; her favorite niece, Crystal Session, and a host of nieces, nephews, cousins, and friends.

Norma Lee David, aka Norma Lee, the black Marilyn Monroe, was the fifth daughter of Norman and Elizabeth Covington. Born June 25, 1949, in Baltimore County, she was raised, with her 7 siblings, in Turner Station. With all the children being... View Obituary & Service Information

The family of Norma Lee David created this Life Tributes page to make it easy to share your memories.

Send flowers to the David family.