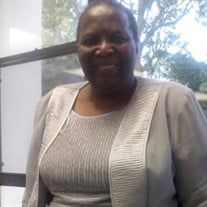 Legacy of Life Nora Lee Smith was born October 9th 1948 to the late Maggie and Shirley Spencer. Nora was raised by her grandparents Ada and Addison Brown in Englehard, North Carolina where she graduated from Mattamuskeet School in Hyde County. She was preceded in death by her son Christopher Taylor and his father Samuel Taylor. Nora peacefully departed this Earth at her home on Sunday, March 21, 2021. At an early age Nora accepted Christ into her life and practically lived at Church from then on into her adulthood. She was a longtime member of Evening Star Baptist Church in Brooklyn, New York. Nora retired from Methodist hospital in Brooklyn, New York where she worked for about 25 years. Upon moving to Richmond she joined Rising Mount Zion Baptist Church where she served as a missionary, and was a part of the senior and women’s ministry. She loved her church family dearly. She enjoyed praise and worship music especially “Order my Steps” and was a true missionary in her church and building community. She was always ready and willing to help anyone who needed a hand, exemplifying “loving your neighbor as you love yourself!” As a resident of the Atlantic at Brook Run, she served faithfully as president of the activity committee. She assisted in the planning of various activities for the residents of the building in which she resided. Nora was a kindhearted person and well-liked by all her neighbors. Nora is survived by her daughter Christina Turner and son-in-law Milton Turner, Jr, son Edward Smith and daughter-in-law Rosemarie Smith and daughter-in-kind Lavaughn Prevatt. Nora had a very close and special relationship with her grandchildren. She leaves behind to cherish her memory: granddaughters, Shannon Smith, Karimah and Tahairah Turner, and Vida Prevatt; grandsons, Dominant Turner, Demitre Prevatt, and Matthew Hernandez; sister, Alice Mackey and brother-in-law Erskine Mackey, sister and brothers-in-kind, Sharon Lee, Larry Wooten and Wayne Washington, and a host of friends whom she loved dearly. Some of the other children whose lives Nora touched include Shantayle, Dashawn, Alicia, Anderson, Giselle, Sophia, and N’neka. Gone But Never Forgotten

Legacy of Life Nora Lee Smith was born October 9th 1948 to the late Maggie and Shirley Spencer. Nora was raised by her grandparents Ada and Addison Brown in Englehard, North Carolina where she graduated from Mattamuskeet School in Hyde County.... View Obituary & Service Information

The family of Nora Lee Smith created this Life Tributes page to make it easy to share your memories.