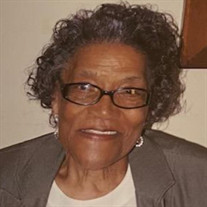 Nina Mae Smith Turner, was born on August 30, 1932 in Baltimore, Maryland, to the late James and Ethel Smith. Nina was the oldest of her siblings. Nina received her education in Baltimore City at St. Monica’s Catholic School, then earning her high school diploma from Carver Vocational Technical High School. Nina played basketball and majored in dress making and tailoring, in which she earned a diploma in both. She was an excellent seamstress. Nina delighted in making beautiful dresses and gowns for her mother, family members and friends. She especially loved making gowns for her social club members, “The Courtiers”, along with making suits for her son Troy. After graduating high school, Nina was joined in holy matrimony with William Barnes (deceased). From this union, came her first son, Timothy Barnes. Nina later gave birth to her second son, Troy Jason who was the apple of her eye. Nina worked several jobs after graduating high school along with completing a few years of college. She found her professional calling while employed with the District of Columbia Juvenile Services. She worked as a counselor and later as a supervisor at Cedar Knoll located in Laurel, MD. While employed at Cedar Knoll, Nina also meant and married her late husband, Jasper Turner. Nina was loving and passionate about all of her kids, grandkids, family member’s kids, neighborhood kids… just kids period. Even after retirement Nina could be found volunteering for several years at the neighborhood elementary school. Nina was confirmed as a Catholic at an early age, however as an adult she became a Methodist and joined Lewin United Methodist Church with her mother and grandmother. Nina took pride in being a helping hand at her church and proudly operating in many positions which included teaching Sunday school, Pastor’s Assistant, choir member, trustee, cooking, and cleaning – Nina had a heart to serve in any capacity she was needed. Nina loved people and people loved Nina. Praising the Lord was her passion in life. Nina loved to dance and socialize with family and friends and was known for her stylish clothes. Her Brightwood Avenue home was the family gathering place where all were welcomed with love. Nina was definitely “the hostess with the mostess”. Along with being an avid traveler, Nina was known for taking her family on a yearly vacation or two. Nina loved road-trips to North Carolina, down to the Eastern shore, Canada and Atlantic City. She especially loved taking road trips to visit family in Norfolk, VA. Nina is preceded in death by her husband – Jasper Turner, mother – Ethel Smith, grandmother – Lucretia Bunch, son – Timothy Barnes, and four brothers – Lonnie Smith, Donald Smith, James Boyd, and Carey Woodlon. Nina leaves to cherish her son Troy (Tracion), three grandsons – Tyler, Timothy, and Troy (Tayari), four granddaughters – Tomiko (Kenny), Tamika, Shana, and Tori, along with 24 great grandchildren, 10 great great grandchildren, 3 sister-in-laws – Lauretta Boyd, Paulette Woodlon, and Roslyn Smith, along with a life-long friend, Myrtle Walker, and a host of nieces, nephews, cousins and friends.

Nina Mae Smith Turner, was born on August 30, 1932 in Baltimore, Maryland, to the late James and Ethel Smith. Nina was the oldest of her siblings. Nina received her education in Baltimore City at St. Monica&#8217;s Catholic School, then earning... View Obituary & Service Information

The family of Nina Mae Turner created this Life Tributes page to make it easy to share your memories.

Send flowers to the Turner family.