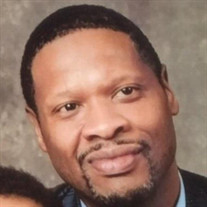 NATHANIEL ETHAN CARROLL, affectionately known as Big E or Nate, was born to Ronald and Clara Carroll on November 25th, 1965. After a lengthy illness, GOD took him home to rest on December 1st, 2021 At an early age, Ethan accepted Christ and was baptized at the Central Baptist Church under the leadership of the Rev. Montague Brackett. He was an active member involved in Boy Scouts Troop 669, Sunday School, and Youth Ministry. He was an unconventional volunteer, often assisting the street evangelism ministry when he could. Ethan was educated in the Baltimore City Public School System and received his high school diploma from Lake Clifton Senior High School in 1985. Ethan showed interest in various types of sports. As a youth, he especially loved football and even had aspirations of becoming a professional football player, especially a defensive lineman. His dream would not come to fruition after sparring with a neighborhood friend that snapped his knee in half with force. Doctors told Ethan he would not be able to play pro football, however, this did not stop his love for sports. He would play JV/Varsity football throughout high school and watch all sports. Ethan would go on to have numerous employment experiences and enjoy working as a Forklift Operator/trainer in Wood Distribution’s Orders Fulfillment Department. Ethan was an extrovert. He was kind, generous, and well-known. He made many friends wherever he went. As a youth, he would always have neighborhood friends in the house playing chess and many games. They would even spend numerous hours on the basketball courts, football fields. wherever there was a sport to be played Ethan and his friends were there. Ethan and his friends would even take food from their respective homes and combine meals to create a feast for themselves. Ethan was always willing to help when asked. He has served as the family barber, furniture mover, painter, griller, and chef. He leaves to cherish in memory: Clara Carroll (Mother), Ronald and Cassandra Carroll (Father and Step-mother), Braycen Smith (Son), Rosalee and Tyrone Weems (Aunt and Uncle), Charles and Vernetta Graves (Uncle and Aunt), Sherri Smith (sister-cousin), Tia Smith (Cousin) Jolie East-Miji (Step-Sister), Zelma Imoke (God-Sister), Carlton, Renaldo and Latasha Brown (Cousin), Gail Jones (Cousin) Lisa Miller (Cousin), Sean Lopez (Cousin), Andre McDuffie and Lee McCoy (Close friend), Patrice Smith (loving friend and mother of his son), and a host of family and friends.

NATHANIEL ETHAN CARROLL, affectionately known as Big E or Nate, was born to Ronald and Clara Carroll on November 25th, 1965. After a lengthy illness, GOD took him home to rest on December 1st, 2021 At an early age, Ethan accepted Christ and... View Obituary & Service Information

The family of Nathaniel Ethan Carroll created this Life Tributes page to make it easy to share your memories.