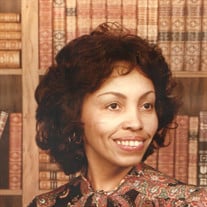 Nancy Yvonne Brown, a daughter of Loyal T. Daniel and Coriene Nicholson Daniel, was born February 9, 1945, in Halifax County NC. She received her formal education through the public schools of Halifax County where she graduated from Eastman High School. Later she was employed by the U.S. Postal Office and loyally served 38 years before she retired. Nancy enjoyed spending time with family and friends. She loved laughing, dancing, travelling, and making others laugh. She could light up any room with her humor and spontaneity. She truly believed in the "shock factor". With her children she was a comforter. Someone they could depend on for strength and unconditional love. She fervently offered up her support and prayers to everyone around her. She valued the spirit of life and had an unspoken wisdom that enlightened all in her presence. Her honesty and genuineness l eft an impression like a breath of fresh air. Nancy transitioned from this life on Wednesday August 18, 2021, at her home surrounded by her family. In addition to her parents, Nancy is now rejoined with her sister, Eunice and two brothers, Theophilus and Alvin. Rejoicing in her memory are husband and friend, Robert (Bobby) Brown, daughter, Tanya Brown, son, Tyler Brown, and three grandchildren (Trinity, Elan, Faith); through marriage, three bonus daughters, a son, seven grandchildren· and two great-grandchildren; her four sisters, Lorraine Gathers, Theola McNeil (David), Audrey Villines, and Marian Williams (Fred); three brothers, Raymond Daniel (Cynthia), Herbert Daniel (Alma), and Dennis Daniel (Kim); three uncles,a host of nieces and nephews, and many other relatives and friends.

Nancy Yvonne Brown, a daughter of Loyal T. Daniel and Coriene Nicholson Daniel, was born February 9, 1945, in Halifax County NC. She received her formal education through the public schools of Halifax County where she graduated from Eastman... View Obituary & Service Information

The family of Nancy Yvonne Brown created this Life Tributes page to make it easy to share your memories.