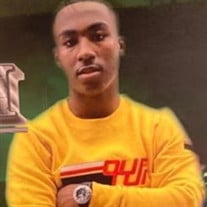 Mossimo Parrish Norfleet, beloved son of Dartanya Jackson and Moses Norfleet, was born on August 8, 2004 in Baltimore, Maryland. He departed this life on July 9, 2021 doing what he loved, riding his dirt bike. He received his early education in the Baltimore City Public School system and later finished in the Baltimore County Public School system. He was employed by 5HEARTSMILES. He was a member of South Church. Mossimo would have been entering the 12th grade this upcoming school year. Mossimo, affectionately known as "Mossi" by family and friends and "King Mossi the One One" by his mom, had a love for outdoor fun and sports such as football, running track, and dirt bike riding with his pack (Bird, Ceddie and Man-Man). He started playing football at the age of 5 for the Avenue Bears where he met his close friends Hosie and Brandon. He continued playing football and was determined to make it to the NFL. He was no Lebron James but that didn't stop him from signing himself up for basketball. Mossi knew he was good at everything. He enjoyed having a good time with family and friends, shopping, and dressing in the latest fashion. Although he was younger than Poodie and Dub oftentimes he felt compelled to prove himself to be the toughest. He would square up" with them all the time, now MsDee he considered to be his "old lady" as he did absolutely no wrong in her eyes, he looked to her as his second mother. Mossi had an extra special relationship with his nephew, more like brother A.J. Mossi's relationship with his mom was unbreakable, irreplaceable and immeasurable. they did lots of things together, traveling, shopping and spending time with family. Mossi and his father shared a bond that was as authentic as any father and son would have. His father was his coach and mentor. Mossimo was loved by many and left a great impression on all with whom he came in contact with. Mossimo was preceded in death by his older brother Parrish and his uncle James. Mossimo leaves to mourn his mother, Dartanya Jackson (Ty); his father, Moses Norfleet (Tierra; maternal grandmother, Margie; paternal grandmother, Mary; three sisters, Candace, Inisha and Shanell; four brothers, Moses, Danyell, Isaish and Marlo; one brother-in-law, Loris; four bonus siblings, Summer, Dylan, Ty-Ty and Tweezy; six aunts, Precious, Linda Satya, Elizabeth, Leaurdra and Betty; two uncles, Stevie and Quentin; six nieces, Kayden, Payton, Kolbi, Erin, Bailee, and Mori' wight nephews, Ashton, Chaise, Gilbert, Jamie, Moses, Bradley, Loris and Myles; special cousins, Ju-Ju, doodles, Man-Man, Fat-Fat and Mya; Godparents, Courtney and Che'; spceial friends, Jah, Hosie, Melvin, Jolil, Kenyon and Brandon,; Girlfriend, Sam; and a host of other family and friends.

Mossimo Parrish Norfleet, beloved son of Dartanya Jackson and Moses Norfleet, was born on August 8, 2004 in Baltimore, Maryland. He departed this life on July 9, 2021 doing what he loved, riding his dirt bike. He received his early education... View Obituary & Service Information

The family of Mossimo Norfleet created this Life Tributes page to make it easy to share your memories.

Send flowers to the Norfleet family.