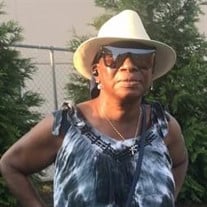 MONA ZELDA NEAL, daughter of Mary Francis Baylor and the late Donald William Neal Sr., was born on February 15, 1959. She departed this earth on December 17, 2021. Mona received her education in the Baltimore City Public School System where she completed and received her diploma and certification as a photocopier engineer at Data Processing Institute. She then moved on and worked various places before landing herself as a supervisor for VSP in Aviation at Thurgood Marshall Airport in 1988. She also worked in contractual maintenance for the late Lee Newton. Mona always liked to sing songs by Mary J Blige, Ashanti, Keyshia Cole, Charlie Wilson, etc. and grooved to the sound. She also like to shop; it became her new addiction. She enjoyed getting her nails and feet done, spending time with her girls and grandkids more that anything, which she adored. He grandchildren were a huge part of life. She did everything with them and for them. No one could tell her anything bad about them because they were her world. Mona also enjoyed treating herself, cleaning and making things spotless. She also loved a good Denzel movie. She would help anyone that needed a helping hand. Through her last month of hospital stays and declining, she was always ready when it was time to be discharged. She leaves to cherish her memory: her mother, Mary F. Baylor; two daughters, Tonya and Shaiti Neal; three grandchildren, Khalia Hargis, Kema Neal and her King Rodney Brown III. She also adored Rodney’s Dad, Big Rodney Brown Jr., which she looked at as her own; three sisters, Margaret aka Dino, Charlene and Desiree aka Niecy; in-laws Debbie Neal and Donald Fitzgerald; two brothers who preceded her in death, Darrell and Ellis Baylor; and three other brothers, Carl and David Baylor, and Donald Neal Jr. aka Fatman; a few close cousins, Bassie, Neek, Francis and more; nieces and nephews, Keisha, Torey, (the late) Natalie, Shannon and Katlynn, David, Elissa, and Evan; and a host of great-nieces and -nephew; devoted friends, Kahlil the father of two daughters, Tanya Dixon and her kids who she loves so much; Ms. Burt, Sonya, Ms. Diane and sister; her late husband, Milton Conner, and late Amos Jones and many more.

The family of Mona Zelda Neal created this Life Tributes page to make it easy to share your memories.

Send flowers to the Neal family.