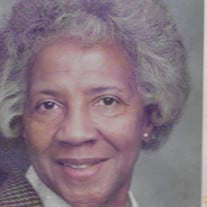 MOENA WYDELL DOWNING was born to Mae Sylvia Downing on October 6, 1926 in Accomack County, Maryland. She departed this Life on Sunday, August 1, 2021 in Baltimore County, Maryland. The Downing family relocated from Accomack County to their farm in Worcester County where Moena attended public schools. After graduating from High School, she moved to Baltimore, Maryland where she lived with her sister Geraldine Jester. Moena sought employment and found a job at the Sparrows Point Military base on Holabird Avenue in Dundalk, Maryland. Moena met her intended husband Floyd R. Armstrong at the military base. After Floyd was discharged from the US. Marine Corps, he wed Moena in 1947. Floyd and Moena reared six children: Sylvia, Marlene (deceased), Corinthia, Floyd, Laverne (deceased)and Vincent. The family resided in East Baltimore where they became a very close-knit clan and lived very active lives. Floyd took his children to shows, movies, amusement parks, and beaches he also provided them with plenty of books to read. Mrs. Armstrong attended Israel Baptist Church for 32 years. She loved Wednesday evening Bible Studies, the Flower Circle, and Sunday Church School. When her children were younger, she loved taking them with her to Sunday services and PTA meetings. Moena and Floyd were a fun-loving couple. They enjoyed going to cabarets at the Dundalk Union Hall and hanging out with their friends and family. Moena was a “fashionista” who loved dressing herself and her husband in bright colored clothing. Her fingernails were always perfectly painted and she wore a ring on every finger. Moena was a housewife until her children became school age then she pursued a career with the Maryland State Government. She enrolled in a State Nursing Program, became employed and continued working with the State until her retirement in 1992. Floyd and Moena relocated to the Reservoir Hill Community where they spent their emptynest years enjoying familial relationships with neighbors and friends. Floyd passed away in 1993 after a very lengthy illness then Moena became ill in 2005. She lived with her daughter Marlene who passed away in 2009, then lived with her daughter Corinthia. She enjoyed residing in the Hazelwood Park East Community in Baltimore County where she would sit out on the front porch waving to neighbors and passerbys until becoming bed-ridden then passing away from complications of Dementia and Alzheimer’s Disease. Moena leaves to mourn four children: Sylvia, Corinthia, Floyd (Rocky), and Vincent (Marlene and LaVerne pre-deceased their mother). She also leaves to mourn her youngest sibling, Shirley Downing-Cuningham; seven grandchildren, Tammy, William, Dahnell Craig (deceased), Terrence, Tyrell, Deitrick and Che; five grandchildren-in-law, Alan, Sr, Jeanetta, Tammy, Kima and Laura; six nephews and fourteen neices, Downing Clan - Gregory, Melvin, Keith, Helen,Debra, Kimberly, Rosetta, Elizabeth, Frances, Brenda, Yolanda and Nita; Armstrong Clan – Tony, Terrell, Glen, Denise, Natalie, Tanya, Monica and Heidi; a host of great-grandchildren, great-great-grandchildren, great-nieces and -nephews. She also leaves her very best girlfriend, Lugenia Price, and sons, Thomas and Rick; also a dear friend and next door neighbor, Margaret Wilson; in addition to her special friend and co-worker, Marjorie Purvey.

The family of Moena W.D. Armstrong created this Life Tributes page to make it easy to share your memories.

Send flowers to the Armstrong family.