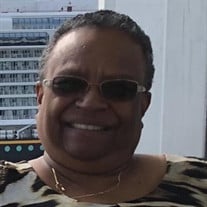 Legacy of Love On Friday, August 6, 2021, at the age of 71, Mildred Elaine Cotman Perry left this earthly plane to be at peace with the Lord. Mildred Elaine Cotman Perry was born on June 19, 1950, in Charles City County to the late Julius H. and Mary J. Cotman. Mildred graduated from Ruthville High School in Charles City, Virginia in 1968 and attended Hampton Institute in Hampton, Virginia that fall. She furthered her education at Delaware State University in Dover, Delaware, earning a Bachelor’s of Science in Early Childhood for Exceptional Children in 1983. She continued to receive a Masters of Education (M.A.Ed) in School Psychology in 1996 and Post graduate Educational Specialist in School Psychology (Ed.S) in 1998 from The College of William & Mary in Williamsburg, Virginia, earning her recognition in the National Honor Society, the American Psychological Association, and induction to Phi Beta Kappa Honor Society. At an early age, Mildred became a member of Little Elam Baptist Church in Charles City County, Virginia and later joined First Baptist Church on King Street in Hampton, Virginia. Mildred’s love for education was a driving force throughout her lifetime and she shared this love to all she came across. She began her career as a Special Education teacher and then became a School Psychologist. She retired from Prince William County Schools after 35 years of service, leaving a legacy of excellence and a long-lasting impact on thousands of children’s lives. In her leisure, Mildred enjoyed learning to play the piano, watching old westerns, and British period series. The most important thing to her was spending time with her children, grandchildren, and especially her great grandson. Mildred was preceded in death by her parents; sisters, Hazel, Ella Mae, and Gloria; and brothers James and Thomas. She is survived by her son, Martrel Perry (Kimberly), and daughter, TraMel Perry, five grandchildren: Marcus Patton, Nya, Mychaela, Jada, and Isaiah Perry; great-grandson, Micah Vaughn Henderson; three sisters: Carrie Summers (James), Susie Adkins (Joel), and Annie Hill; three brothers: Richard, Robert Sr. (Janet), and Joseph Sr.; 13 nephews, 12 nieces, 64 great nieces and nephews; countless cousins; and other family and friends.

The family of Mildred Cotman Perry created this Life Tributes page to make it easy to share your memories.

Send flowers to the Perry family.