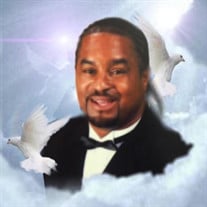 Legacy of Life Michael Anthony Cotman, Sr., was born on May 28, 1964 in Richmond, Virginia to Sarah Virginia Jefferson and the late James F. Jones. He was born the third of six siblings. He was preceded in death by his cousin, Rickie Brown; father-in-law, Ronald Skipwith Johnson and sister-in-law, Lettice Marie Johnson Bell. He received his formal education from Maggie L. Walker High School. Michael accepted Christ at the age of 32. He was united with Richmond Christian Center where he received his spiritual guidance. He remained strong and has never veered from the word. He had a vibrant and invigorating personality that would light up a room. He was united in holy matrimony to Traci Anne Johnson on December 24, 1987 in Richmond, Virginia. Michael formerly was employed by Ennis Paint’s as a supervisor for 30 years, where he later retired. Michael was always so full of joy. He was a wonderful husband, father, grandfather, son and brother that loved his family dearly. He was very devoted and it was nothing or no one that could ever come between the love of the family. His wife Traci was the center of his world as he showed her daily. Everyone would go to him when they had a problem. He often talked about the Lord and what He has done for him. He was a God-fearing man that loved the Lord. Michael would do any and everything to put a smile on anyone’s face which continually showed how great of a man he was. As Michael looked into his wife’s eyes, she asked him, “if he was ready for the Lord”? He responded by blinking his eyes to say yes and gained his wings on August 10, 2021 peacefully after sharing his love and light with the world for 57 well lived years. He leaves his memories to his beloved wife, Traci Anne Cotman of 33 years; caring 3 sons, Michael Cotman, Jr., Ronald Cotman and Kenell Oliver; beloved 4 daughters, Kia Cotman, Tia Harris, Zia Cotman and China Johnson; 8 grandchildren, Khali, Mikiyah, Malayah, Anthony, Clarence, Ian, Shamiyah and Zyasia; mother, Sarah Jefferson; sisters, Annette Jones, Tammy Cotman, and Geneva Cotman; brother, Forrest Jones and James Jones Jr.; mother-in-law, Annie E. Johnson; a host of other relatives and friends who loved him dearly.

Legacy of Life Michael Anthony Cotman, Sr., was born on May 28, 1964 in Richmond, Virginia to Sarah Virginia Jefferson and the late James F. Jones. He was born the third of six siblings. He was preceded in death by his cousin, Rickie Brown;... View Obituary & Service Information

The family of Michael Anthony Cotman created this Life Tributes page to make it easy to share your memories.

Michael Anthony Cotman, Sr., was born on May...

Send flowers to the Cotman family.