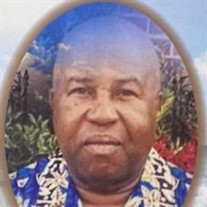 MICHAEL “MEGGIE” CLARKE was born September 13, 1947 in Trinidad and Tobago to the late Dolly Clarke Percy. He peacefully departed on November 11, 2021 at the home he shared with his with wife of 46 years, Lenore. Michael attended Nelson Street Boys School and Queens Royal College. At the tender age of 16 Michael traveled to Venezuela for a few years to play with a band. He later came back to Trinidad, and joined a group named The Rockerfellars, who he played with until he migrated to the United States in 1972 to play in another band in Missouri. Michael’s multi-faceted talents allowed him to compose music with his brothers (the Boothman’s) from band and play the guitar, bass guitar, harmonica, and steel pan; but he excelled on the drums, especially the snare drum. His skills were so impressive that he inspired many in Trinidad and abroad. Michael has graced the stage with greats like James Brown, Chaka Khan and Carlos Santana. Michael also had the privilege of playing for the current Queen of England in his younger days. Once in America Michael landed many music gigs, but also settled on other careers such as carpenter and welder, at Sparrows Point, but eventually retiring from the Coast Guard Welding. Once in the USA, Michael would go to Baltimore to visit his family, and one of those visits to his Aunt Yvonne’s, he met her neighbor, the love of his life, Lenore. Michael and Lenore wed in April of 1975. Through that union he inherited three kids, Bernard and Shawn Hughes and Leslie Ann Whitfeld (FKA Hughes). Michael was so smitten with Lenore that unbeknownst to her he gave up an opportunity to do a three-year tour with Harry Belafonte, because he didn’t want to leave his bride alone for that long, especially with three small children. Michael was small in stature, but his kind heart and life-of-the-party personality won him numerous lifelong friends around the world. Not only did Michael’s hands make beautiful music, he was an extraordinary cook. People truly enjoyed being in his company and experiencing what it is really like to have a meal made for you, from love. The joy of cooking for the ones he loved was truly his love language. Michael is preceded in death by his mother Dolly Clarke Percy, and brother Francis Clarke. Michael leaves behind to cherish his memory: a loving and adoring wife, Lenore Clarke, and their three children; two grandchildren, Angel Connor and Cameron Hughes; additional surviving siblings; several nieces and nephews, countless cousins, and a host of wonderful relatives and great friends here in Baltimore, and around the world. He will be forever remembered!

MICHAEL &#8220;MEGGIE&#8221; CLARKE was born September 13, 1947 in Trinidad and Tobago to the late Dolly Clarke Percy. He peacefully departed on November 11, 2021 at the home he shared with his with wife of 46 years, Lenore. Michael attended... View Obituary & Service Information

The family of Michael Clarke created this Life Tributes page to make it easy to share your memories.

Send flowers to the Clarke family.