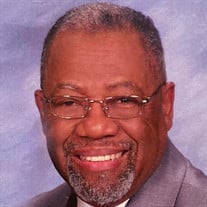 MELVIN BRACEY’S journey began on August 4, 1933, in Lacross, Virginia. He departed life on March 24, 2022. He was born to the late Gola Bracey and Mabel (Jackson) Bracey. As a young boy he moved to Baltimore, Maryland. He received his education in Baltimore City Public School System and graduated from Dunbar High School. He had some college education from Coppin State College before serving in the United States Air Force in the Korean War. He worked for Bethlehem Steel and retired from the United States Postal Service after 30 years. He married the love of his life Gloria T. Bracey on May 2, 1959 and they were blessed to be married for 60 years, she preceded him in death on July 27, 2019. They had one son, Melvin. As we remember Melvin we have so much to celebrate about his life. He joined the church and was baptized at a young age. He was a true man of God and a faithful member of the Southern Baptist Church for many years and a dedicated member of the senior usher board. Melvin participated in Christian education and church celebrations. He was the chairperson, with his beloved sister Harriette Lashley for the 71st church anniversary and 35th pastoral anniversary for Rev. Nathaniel Higgs. Melvin was devoted to his family and enjoyed spending time with them. He was chairman of the Bracey Zodiac Family Club. The family would often gather to celebrate holidays and one another’s birthdays at each other’s homes, and they all traveled together on memorable vacations. He loved sports football and baseball. Melvin leaves to cherish his memory: his son Melvin (wife Vanessa); six grandchildren, L’Kiesha, Melvin, Yolanda, Mark, Emmanuel and Angel; fve great-grandchildren; two sisters, Harriette Lashley and Mary Loretta Johnson; two sisters-in-law, Dorothy Bracey and Mary Bracey Dunston; two goddaughters, Renee Johnson and Danielle Price; nieces and nephews, and a host of other relatives and friends. Preceding him in death was one sister Carolyn Jordon and six brothers Herman, Lawrence, Wilbert, Alvin, Clyde and Felton Bracey.

MELVIN BRACEY&#8217;S journey began on August 4, 1933, in Lacross, Virginia. He departed life on March 24, 2022. He was born to the late Gola Bracey and Mabel (Jackson) Bracey. As a young boy he moved to Baltimore, Maryland. He received his... View Obituary & Service Information

The family of Melvin "Ular" Bracey created this Life Tributes page to make it easy to share your memories.

Send flowers to the Bracey family.