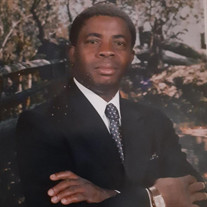 My Dad, SIR MATTHEW ONUIGBO, son of Mr. and Mrs. Onuigbo Dikeocha,has passed away at the age of 68 on March 6, 2021, in his home in Windsor Mill, Maryland. He passed after dealing with an illness lasting a couple of months. My dad was born in (Umuokpara-Anyanwu, Umu-Akpuru) Amiyi Umaka, Njaba Local Government Area, Imo State, Nigeria. My dad’s younger years were rough for him because both of his parents died while he was young. He was the 2nd youngest out of 6 siblings born from Mr. and Mrs. Onuigbo Dikeocha. Despite this, he successfully gained admission to one of the best high schools at the time. My dad went to school at Stella Maris High School in Port Harcourt. He was one of the beststudents while he was there and excelled in his studies. He was the only one out of his siblings to graduate from high school. After high school he gained a job at the Nigeria Railway Corporation which did not last; but he was at this job to land at his dream job at the Bank. He talked about working at the Bank among his peers to the point of being cajoled whether his father owned the Bank to work. When he eventually got this dream job of his in Lagos he developed an interest in Accounting which led him to pursue a degree in Accounting in America at Morgan State University. He used the funds he raised while working at the Bank to pay for his tuition. He obtained both Bachelor’s and Master’s degrees in Accounting from Morgan State University, Baltimore, Maryland. After his graduation he then went back to Nigeria to marry my mom, Christiana Chinwendu Onuigbo and had 2 daughters and 2 sons. The tragic event in his younger life helped mold him into the man that he was to his death. My dad was a gentle man due to his upbringing as a child. The struggles that he went through in his youth caused him to be unwilling to take risks during his life. Despite this, he still did his best to support his family in any way that he could. Whether it was working to earn money, or providing life advice for his children, he was someone who put his family above anything else in his life. My dad worked until he had heart issues that required open heart surgery years ago. These issues only got worse in 2020. After he was checked into multiple hospitals, my family and I decided to take care of him in his home in order to keep him comfortable. I gave up going to classes in order to help my mother take care of him. However, on the 6th of March, he closed his eyes and just never woke up again. We love you Daddy! May your soul rest in peace!! Watch over all of us!!! Signed: Austin Dilichi Onuigbo, Son for the Family.

My Dad, SIR MATTHEW ONUIGBO, son of Mr. and Mrs. Onuigbo Dikeocha,has passed away at the age of 68 on March 6, 2021, in his home in Windsor Mill, Maryland. He passed after dealing with an illness lasting a couple of months. My dad was born... View Obituary & Service Information

The family of Matthew Chukwuma Onuigbo created this Life Tributes page to make it easy to share your memories.

Send flowers to the Onuigbo family.