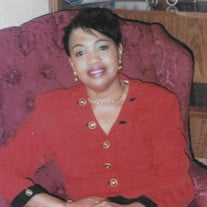 Mary Louise Watford White daughter of the late Mae Bettie Watford and Carter Watford was born November 1, 1945 at Roanoke Chowan Hospital in Ahoskie, North Carolina. Mary departed this earthly life to life eternal on Tuesday, May 3, 2022 peacefully at her home. Mary was reared in Ahoskie (Mooretown), NC. She graduated from C.S. Brown in Winton, North Carolina on June 3, 1966. She later married the late William Howard White in August of 1966. Then they later relocated to Baltimore, Maryland and to this union they were blessed with two beautiful daughters Tanya and Vanessa. Mary worked at Johns Hopkins Hospital starting in the Escort Department then later transferring to the Pathology Department as a Lab Aid, where she continued to be a dedicated and faithful employee for 47 years until she retired in 2011. She knew the need for Christ in her life so she then joined the Friendship Baptist Church where she enjoyed fellowshipping and singing in their choir for over 40 years. She then transitioned her membership to New Christian Memorial Church where she was a faithful member until the pandemic. Mary was a phenomenal wife, mother, grandmother, godmother, sister, aunt, and friend. She had many hobbies that she enjoyed which included; tending to her flowers that made her yard beautiful, planting delicious vegetables in her garden, talking on the phone (well, she talked and you listened!) and cooking for her family which included baking her famous Mary White sweet potatoe pies. She did all of these things at her home on North Denison Street where she lived for 52 years, which her astounding neighbors made it a great place to take care of her family. Mary was preceded in death by her parents Mae Bettie and Carter Watford, her husband William White, sister Elizabeth Watford and three step brothers Lee Jr., Lonnie Ray, and Rudolph Watford. Mary leaves to cherish her memories forever; her two princess’s Tanya Janey (Rodney) and Vanessa Goins (Seth) of Baltimore, Maryland; one grandson Dawan Janey (Gabrielle) of Baltimore, Maryland; five great grandchildren Maliya, Christian, Leah, Payton, and Mason; goddaughter/niece Stephanie Craig of Aulander, North Carolina; three sisters Agnes Askew (Brent) of Colerain, North Carolina, Bettie J. Winston (Vernon) of Ahoskie, North Carolina. Fannie Watford of Baltimore, Maryland; two brothers Robert Watford (Sandra) of Ahoskie, NC and Albert Watford of Powellsville, North Carolina; three step-sisters Bessie M. Watford, Evie L. Collins (Granville) of Baltimore, Maryland, and Alice M. Watford of Hampton, Virginia; best friend for 54 years Peggy House of Baltimore, Maryland; and a host of nieces, nephews, other relatives and friends. We also can’t forget her Little Diamond of the home, her dog.

The family of Mary Louise White created this Life Tributes page to make it easy to share your memories.