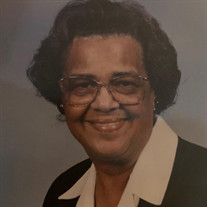 Mary McLean Adkins Johnson, second daughter of the late William and Mary Adkins, was born on September 14,1926 in Baltimore, Maryland. She departed this life at her longtime residence in the Ashburton neighborhood on September 18, 2021. Mary received her education in the Baltimore City Public School system, graduating from Frederick Douglass High School in 1943. After high school, she matriculated at Hampton Institute (University) and received her bachelor’s degree in Home Economics in 1947. While a student at Hampton, she met her future husband, Harold Ray Johnson – a fellow student from Winston-Salem, North Carolina. Mary and Harold Ray were joined in Holy Matrimony on August 29, 1948. From this union, two daughters, Sharon Rae and Mary Rowena were born. Mary began her teaching career in the Howard County Public School system at a small neighborhood school in Cooksville, Maryland. While her husband completed medical school at Meharry, Mary taught home economics in the Nashville Tennessee Public School system. When Harold Ray completed his internship in surgery in Pennsylvania, she worked in the Reading Pennsylvania Public School system. They returned to Maryland when Harold Ray finished his residency at the Fort Howard Veterans Administration Hospital. Mary taught home economics in the Baltimore City Public School system until her retirement. Mary was a talented seamstress who made dresses, coats and special occasion outfits for herself and her daughters. Her culinary baking skills were well known. To entice her to bake, her family and friends would purchase the ingredients for her famous bourbon and pineapple upside down cakes. Mary was a “farm to table” advocate and encouraged the consumption of foods in their proper season. She enjoyed taking youngsters to a farm in Howard County to help her harvest large quantities of fresh strawberries and blackberries that she would preserve or bake into tarts or pies. Mary was a member of the Hampton Pals and affiliated with Hampton University Alumni Association. For over sixty years, Mary was a faithful member of Union Baptist Church. She served as a member of the Cultural Arts Committee, a music and arts ministry that hosted recitals and receptions for Baltimore area classical music artists. Mary regularly visited the sick and shut-in members of the church and community and sent cards of encouragement. She enjoyed the theater and was a Center Stage season ticketholder. Mary traveled to various cities to see her former student, Anna Deavere Smith, perform in off-Broadway productions. One of her favorite passions was “outlet shopping” at the various shopping outlets in the Mid Atlantic area. She leaves to cherish her memory: daughters Sharon R. Johnson and Mary R. Johnson, her brother-in-law Allen Meacham Sr., her nephew Allen Meacham Jr., her godson Marcus S. Simms, great-nephews, great-nieces, cousins and a host of other relatives and friends. She was predeceased by her beloved husband Harold Ray Johnson, M.D., F.A.C.S., in 1997 and sister, Erma Ann Meacham in 1996. The link for the service by webcast is:https://webcast.funeralvue.com/events/viewer/61759

Mary McLean Adkins Johnson, second daughter of the late William and Mary Adkins, was born on September 14,1926 in Baltimore, Maryland. She departed this life at her longtime residence in the Ashburton neighborhood on September 18, 2021. Mary... View Obituary & Service Information

The family of Mary A Johnson created this Life Tributes page to make it easy to share your memories.