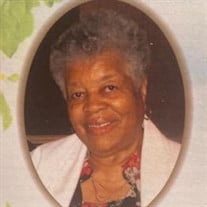 In the still of the night of October 1, 2021, MARY ANN BYRD departed this life at the Northwest Hospital Future Care Rehabilitation Center, 5413 Old Court Road in Baltimore. Maryland. Mary Ann Newby was born on December 24, 1922 to Rosa Mae and John Arthur Newby in the Isle of Wright County, Suffolk, Virginia. The family migrated to Baltimore City where Ann attended Baltimore City Public Schools. She fell in love and married the late Floyd Houston Byrd and from this union two sons were born, Houston and Conrad Byrd. When this union ended, Ann became attached to the late Melvin Bookman and bore two additional sons, Jerome and Marcus Bookman. Ann was nurtured in a Christian home and at a very early age accepted Jesus Christ as her savior and was baptized. For many years she was pastored by Reverend Albert J. Hardy at his church located at Wolfe and Biddle Streets. Later in life she joined and communicated with her savior at the Lord’s Church International under the pastoral leadership of Pastor James E. Bailey until God called her home. Working at Baltimore City Hospital which is now the Bayview Medical Center is where her employment history began. Conclusion of her employment life ended satisfactorily with retirement from the dry cleaners at Wolfe Street and North Avenue. Ann was a devoted mother who always supported her family in their endeavors and maintained a spotless home for them to reside comfortably, invite and entertain friends. Those who knew Ann learned to love her. They recognized and respected her honesty and refusal to lie. She always told the truth as she saw it. They learned that Ann’s love was unconditional. If given the opportunity, she always encouraged one to see the bigger picture and never to settle for second best. Ann carried the persona of a queen. She always held her head high, stood tall and walked with pride. As a queen, she was never timid about voicing her opinion or have others cater to her wants as was customary for a queen. In fact, her church members addressed her as Queen Ann. Ann loved adventure, traveling to various destinations and utilizing her seamstress skills. She loved to sew. Her final adventure was to at the age of 98 live alone and care for herself until three months prior to being called by God. That’s quite an accomplishment. For 98 years she was basically on her own until God invited her into his home. WELCOME HOME ANN Precious memories will be shared by: Houston Byrd (deceased), (Darlene), Conrad Byrd (Viola), Jerome Bookman and Marcus Bookman (Joyce); six grandchildren, Houston Byrd, Dwayne Byrd, Ave’ Bullard, Marcus Byrd, T. Kia Bookman and Marcus Bookman (Anastacia); a host of grandchildren, great-grandchildren, greatgreat-grandchildren, nieces, nephews, other relatives and friends.

The family of Mary A. Byrd created this Life Tributes page to make it easy to share your memories.

Send flowers to the Byrd family.