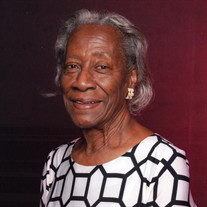 Martha Lee Brown, also called "Sister Bae," was born on May 27, 1932 in Rocky Mount, North Carolina to the late George Washington and Mariah Henderson. She departed this life on Thursday, December 23, 2021, in the hospital from battling dementia. Martha was the fourth oldest sibling out of eight children and the oldest sister. Martha loved and cared so deeply for her siblings, especially her two sisters, Mary and Dollie. She was baptized and sang with the St. Paul Baptist Church in Battleboro, North Carolina. While attending Booker T. Washington High School, she played in the high school band and graduated during June 1952. Martha joined Amos Brown, her high school sweetheart, in Holy Matrimony, February 1953. Amos showered her with true loved and briskly moved them right into their new home already prepared for them in Baltimore, Maryland on their wedding day. Both raised as Christians, Martha and Amos attended and joined Southern Baptist Church, in East Baltimore. Martha loved attending church service every Sunday and was a member of the Seasoned Saints. Martha remained a member of Southern Baptist Church until God called her home to be with the Lord. Any issues that came amongst us, Mother would always say, "Put It In the Hands of the Lord." (Amen). Martha and Amos' union conceived their daughter Angela. Martha leaves to cherish her loving and devoted daughter, Angela Brown-Davis; son-in-law James Davis; three grandsons, Antoine Davis (twin brother preceded Antonio Davis after birth) and Dontae Davis of Baltimore, Maryland. Martha also had extended children Juanita Brown Bullock (Clem) of Texas; Denise Brown of Florida; and Amos Brown Jr. of Indiana. Martha showed love and treated her stepchildren as her own. Martha shared a love for the Masons along with her husband Amos for many, many years. Her husband Amos was a Worshipful Grand Master 33rd degree until his death from lung cancer during 1992. Martha ended her dedicated services as an Eastern Star member and retired from Carr-Lowery Glass Company to raise her beloved grandson Antoine during 1988. Whenever duty called, Martha always made herself available, to accommodate whatever/whoever asked for assistance until dementia made things difficult for her to focus clearly and drive. Martha would care for relatives; go to the market, wash clothes and cook for others. You would never go hungry at Martha's house, because she always offered to feed you. Her love of servitude has impacted her children and friends. Mother's grateful and devoted friends left to cherish her are Virginia Cherry; Harriett Lashley, Bobbie Mangum, Lillian Smith; and a host of friends, family, co-workers and newly developed bonds with staff at Saint Elizabeth's Nursing Center.

Martha Lee Brown, also called "Sister Bae," was born on May 27, 1932 in Rocky Mount, North Carolina to the late George Washington and Mariah Henderson. She departed this life on Thursday, December 23, 2021, in the hospital from battling dementia.... View Obituary & Service Information

The family of Martha Lee Brown created this Life Tributes page to make it easy to share your memories.