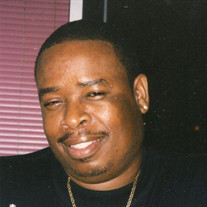 MARK ANTHONY KEARNEY was born on July 17, 1967, to the late Pastor Prince Kearney and the late Alberta Kearney. He departed this life after a brief illness on Wednesday, August 25, 2021, at his home. During Mark’s youth his father was the Pastor of First Charity Baptist Church, and his elegant mother was the First Lady and at that time the church was located on Asquith Street in Baltimore City. Mark often shared stories about his loving family and their strong faith and commitment to God. His father Pastor Prince Kearney and First Lady Alberta Kearney laid the foundation for Mark to become such a good man. There were lessons taught and witnessed of integrity, responsibility, respect and having a personal relationship with God as it will always sustain you. His relationship with First Charity Baptist Church’s current and longtime leader Senior Pastor Hollis C. Neal has always been one of mutual respect. Mark always appreciated Pastor Neal for all the love and support he provided to the Kearney family over the years. Mark attended Carver Senior High School and graduated in 1985. He later attended and graduated from New England Tractor Trailer Training School for CDL training. Mark experienced a long career in trucking and was proud of his many accomplishments, including being a multiple million miler of dispatched miles. Mark has traveled this country many times. Much of his knowledge was learned from his older brother, Prince Arthur Kearney III who gave Mark his first important job in the trucking industry. Mark continued that honorable deed that became a legacy by passing his knowledge on to many younger and less experienced truck drivers. During many of the years he spent at Cowen Trucking Industries, he held a position as a Professional Trainer. Mark had a natural ability to teach, analyze skills and demonstrate better and safer approaches. Mark was always a hard worker and had an incredible work ethic. He always said that his father instilled that trait in him and that he learned by his example. Mark loved his recent trucking position with Son of A Gunn Logistics LLC most of all. Mark felt he was a part of an exciting team with great growth potential under the ownership of an entrepreneurial young couple. On July 27, 2009, Mark married the love of his life Paula Kearney. They shared a mutual love of traveling, especially across the United States. They also shared a great passion for jazz music and enjoyed the most amazing shows featuring the greatest talent across this country. Mark and Paula also shared those easy relaxing days at home enjoying each other’s company, sometimes they incorporated their favorite TV shows or simply a good talk about the week. This was a deep and abiding love of two imperfect people who were perfect for each other. Mark loved his three children so very much. He also enjoyed the company of his children Derron, Devin and Shannan. Each experience they shared together gave him so much joy. He loved and recognized the specialness that each of them brought to him and to this world. Mark was over the top with love and joy for Shannan’s beautiful son Asher. Of course, Mark had football plans for Asher’s future. Everyone enjoyed Mark’s wonderful sense of humor. He could joke anybody into a happy mood. Mark was the most enthusiastic Baltimore Ravens Superfan. He could provide analysis of any football game past and present. He also taught Paula way more about football then she ever wanted to know. His Ravens’ Nest at home was full of memorabilia and was his most comfortable place to relax in. He loved to host an important football game. Well, really, they were all important games. In his life Mark held a personal mission of providing mentoring and guidance to young men. He often used his life experiences and innate wisdom as a teaching tool. This ability was just one of Mark’s many gifts. His relatability and kindness made everyone feel comfortable. Mark was loved by many and made many friends wherever he went, and he will be sincerely missed by everyone that knew him. Mark leaves to cherish his memory, his beloved wife, Paula Stokes Kearney; one daughter, Shannan Hall; two sons, Derron Kearney and Devin Kearney; one grandson, Asher Hall; five sisters, Barbara Jean Woodard (Calvin), Belinda Rae Witherspoon, Sandra McCoy (Norman), Jacqueline Hodge (Joseph) and Rosalind Kearney; two brothers, Prince Arthur, III (Barbara) and Raynard (Gail), and a host of nieces, nephews, and other relatives and friends.

MARK ANTHONY KEARNEY was born on July 17, 1967, to the late Pastor Prince Kearney and the late Alberta Kearney. He departed this life after a brief illness on Wednesday, August 25, 2021, at his home. During Mark&#8217;s youth his... View Obituary & Service Information

The family of Mark Anthony Kearney created this Life Tributes page to make it easy to share your memories.

Send flowers to the Kearney family.