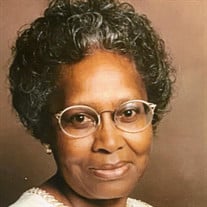 MARJORIE LORRAINE STURDIVANT, daughter of the late Albert and Helen Chase was born on January 6, 1936, in Baltimore, Maryland. She departed this life after a long illness on Sunday, July 18, 2021. She was raised in East Baltimore with siblings Patricia Chase, Roger Chase, Carolyn Addison, Vernell Chase and Albert Chase Jr. and received her education in the Baltimore City Public School System. After graduating from Paul Laurence Dunbar High School, she went to Coppin State College to earn her Bachelor’s then Master’s degrees in Elementary Education. She taught at East Baltimore schools Rutland and Furley, and then her neighborhood school in the Northeast Baltimore community of Lauraville, Garrett Heights Elementary, from which she retired after over thirty years. Marjorie was always well regarded by her students who often even today, speak fondly of her on the Garrett Heights Facebook page as they recount their elementary years with classmates. As an educator, Marjorie was often described as having the ability to see the potential in her students that they often did not see themselves. She strived to give her students courage to find their way in the world, and to show them that anything was possible. She was a fearless advocate for her family and doting grandmother to grandsons Brian Jr. and Matthew Sturdivant, who brought immense joy to her life. Marjorie married the late Archie Sturdivant Jr. in 1958, and from this blessed union, they had sons Archie Sturdivant III and Brian Courtney Sturdivant. She is also survived by sister Patricia Chase; daughter-in-law, Donna Sturdivant; nieces, Toya Lee, Dana Addison, Jocelyn Sturdivant and Judith Murray; nephew, Wilbert Vanderbilt Sturdivant; brother-in-law, Franklin Addison, and a host of other relatives and friends

MARJORIE LORRAINE STURDIVANT, daughter of the late Albert and Helen Chase was born on January 6, 1936, in Baltimore, Maryland. She departed this life after a long illness on Sunday, July 18, 2021. She was raised in East Baltimore with siblings... View Obituary & Service Information

The family of Marjorie C. Sturdivant created this Life Tributes page to make it easy to share your memories.

MARJORIE LORRAINE STURDIVANT, daughter of the late Albert
and...

Send flowers to the Sturdivant family.