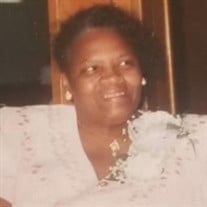 Legacy of Life Our beloved Marjorie Evon Bess entered into eternal rest on Wednesday, March 24, 2021. She was born on July 8, 1942 in the state of Richmond, Virginia. She was the youngest child of Martha Brown. Margie grew up living with her grandmother Mattie Brown and her older twin sisters (Mary and Martha) in central Richmond during her life as a child, because her mother, passed when she was a very young child. The young twins who were ten years older, helped care for Marjorie when Mattie would work. Mattie worked as a seamstress and made clothes for Virginia’s elite society. Margie attended school at Richmond Public Schools and graduated from Armstrong High School. Margie lived in several locations in the Richmond area in her lifetime such as, Jackson Ward, Jefferson Avenue in Church Hill, Creighton Court, and Southside. Margie became a young mom with her first son, Elbert aka Sputnik. Margie continued to live with her grandmother, who helped care for her son so Margie could work. As the years passed, Margie’s family grew to include four more boys, Tony, Jerome, Darrell and Tracey. Margie provided for her family by working at McGuire Veterans Hospital which she later retired from. She also worked as a CNA for Richmond Nursing Home. Marjorie met Albert Bess while working at McGuire Veterans Hospital. They married and moved to a home on Moody Street in South Richmond. They lived there with her sons until Albert Bess passed. Marjorie has been a hard worker most of her life. She loved to shop using catalogs. She was a snazzy dresser and loved to wear designer shoes. She loved magazines too. Margie was a strong woman. She was no pushover when it came to her boys and she did the best she could to raise them and kept them together. She had the help of her sister Mary, whom she adored and loved to hang out with and party as the boys grew older. Margie also enjoyed spending time with her sister Martha, who was a fabulous cook. Margie loved the Lord and attended church faithfully until her health began to fail. She will be missed by her family and friends as she joins her sisters on her new journey. She was preceded in death by her sisters, Mary Brown and Martha Dunn; nephew, Albert Dunn and a brother-in-law, Ben Frank Dunn. Marjorie is survived by sons, Elbert Brown, Tony Melvin Brown, Jerome Brown, Darrell Brown (Ruth) and Tracey Brown (Nora); devoted nieces, Sherella Brown and Gwendolyn Young; a loving great niece, Tamara Elmore (Gene); nieces, Debra Byrd (Melvin), Khadija Hakim and Winifred Otey (Richard); devoted friends, Shirley Hickman and son Johnathan and Renee Morgan and son Elbert Jr.; a host of great-nieces, great-nephews and other relatives and friends.

Legacy of Life Our beloved Marjorie Evon Bess entered into eternal rest on Wednesday, March 24, 2021. She was born on July 8, 1942 in the state of Richmond, Virginia. She was the youngest child of Martha Brown. Margie grew up living with... View Obituary & Service Information

The family of Marjorie E. Bess created this Life Tributes page to make it easy to share your memories.

Send flowers to the Bess family.