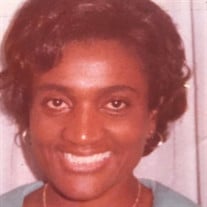 MARJORIE TAYLOR, the youngest of ten children, was born on September 22, 1942, in Martin County, North Carolina to the late Lizzie and James Taylor, Sr. She departed from this world on February 25, 2022, after a sudden, unexpected illness. Those who knew her when she was younger described her as quiet and shy – unlike the older Marjorie, who some might describe as feisty and outgoing. After graduating from West Martin High School in North Carolina, Marjorie married her high school sweetheart, Lester Bess, Jr., and moved to Baltimore, Maryland. As time went on, they were blessed with four children. To help support her family financially, Marjorie worked as a seamstress in various sewing factories, including the London Fog manufacturing plant, once located in Northwest Baltimore and Rynn’s Luggage Repair of Woodlawn. Marjorie had learned to sew at a very young age from her mother, Lizzie, who often made clothes and quilts for the family. Marjorie was a natural at sewing and her fingers could work magic with any type of fabric – from delicate silks to heavy-duty canvases. Not only could she sew clothing from the store-brought Simplicity, Butterick, and McCall’s patterns, but she was highly-skilled in alterations, and would often modify a pattern to improve the fit and appearance. She made dresses for her daughters, Halloween costumes for her grandkids, and even gowns for the entire bridal party of her youngest daughter’s wedding. On one occasion, she sewed a prom gown for her grand-daughter–in less than one day and without a pattern! Marjorie always challenged herself to be best that she could possibly be. It was this determination that lead to her enrolling in college after raising four kids, and earning her Secretarial/Receptionist Diploma. Later, she would earn her Pre-School Child Care Administration Certification. Before attending New Psalmist Baptist Church, Marjorie had been a long-time member of the New Christian Bible Baptist Church. As a part of the women’s choir and a regular attendee of Bible studies, she made several friends. Some of whom she stayed in contact with. Marjorie was a devoted wife and a loving mother, grandmother, and great-grandmother. She will be dearly missed by all who knew her, especially by her sister, Lucinda, who lives miles away, in another state. She said that she always looked forward to phone conversations with Marjorie, her “talking buddy”. Marjorie had a big heart and without the slightest hesitation, she would share whatever she could–her unconditional love, her support, her time, and even her home–with those in need. She is preceded in death by her husband, Lester; her eldest child, Beverly; her parents, Lizzie and James Taylor, Sr.; and seven siblings: Susie, John, James, Jr. Arthur, Blanche, Elsie, and Milton. She leaves to cherish her memory: her two sons, Reginald and Vincent “Chubby”; her daughter, Pamela (Rick); four grandchildren, Leslie, James “Chris”, Aziza, and Niles; seven great-grandchildren, Jalen, Jade, Denver “Tru”, Kash, Nova, Euro, and Giovanni; two sisters, Alliene and Lucinda; as well as a host of other relatives and friends.

MARJORIE TAYLOR, the youngest of ten children, was born on September 22, 1942, in Martin County, North Carolina to the late Lizzie and James Taylor, Sr. She departed from this world on February 25, 2022, after a sudden, unexpected illness. Those... View Obituary & Service Information

The family of Marjorie Taylor Bess created this Life Tributes page to make it easy to share your memories.

MARJORIE TAYLOR, the youngest of ten children, was born on September...

Send flowers to the Bess family.