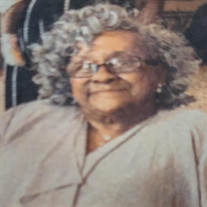 Marion Delores Dugger entered this life on March 9, 1940 to the proud late parents of Margaret and Coleman in Petersburg, VA. On Friday, October 22, 2021, God saw the road was getting rough; the hills were hard to climb. Because He knew how much she could bear, He gently closed her loving eyes and whispered, "Peace be Thine." Marion, affectionately known by her family as "Macy," was raised in the Blandford Community of Petersburg, VA. She received her education in the Petersburg Public School System. Marion was baptized at a young age at Bethany Baptist Church in Petersburg, VA. After relocating to Baltimore, MD in 1958, she later became a member of Israel Baptist Church and followed by membership at Little Ark Missionary Baptist Church. Afterward, God called her to move her membership to serve on the Culinary Ministry, Missionary Ministry, Pastor's Aid, and Woman of Faith Ministry at new Pleasant Grove Missionary Baptist Church under the leadership of Pastor Robert L. Haynes. She remained a devoted member under the leadership of Pastor Haywood Bradley, Jr. Marion was also an active member of the Senior Bible study Weekly until her health failed. Marion had numerous jobs - Sinai Hospital, Bugle Laundry, Jackson's Chuckwagon, and House in the Pine which was later renamed Garden Village Nursing Home where she retired from. After retiring, her love for cooking did not stop. She used her culinary skills to become an entrepreneur at Melba's Place serving delicious meals upon request. In addition, neighbors became benefactors of her meals as well. Marion also loved to bake. Two of her baking specialties were Strawberry Shortcake and 7 up pound cake. Marion met Frank Hairston at House in the Pine, where they were both employed. They later married in 1994 and after a short illness, he preceded her in death. Marion was also preceded in death by her youngest child Rhonda Renee. Marion loved spending time with family family gatherings, and she always remembered all of her family's birthdays. She loved listening to music and one of her all time favorite artist was Etta James. Marion would also start watching Christmas movies on the Hallmark Channel in July. she was the master at playing cards (spades & 5,000). Marion leaves to cherish her memories: children: Cynthia, Michelle, and Darryl; grandchildren: David, Takeida (Steven), Jaleiro, Gabrielle, Michael, Tonya, and Diedra; great-grand children: Dominic, Kyndel, Brianna, Jordan, Zyian, Jayden, Christian, Julian, Carter, Stevena, and Asia; brother: Lee (Pacing); uncle: Charles; nephew: Jermaine; sister girls cousins: Josephine (Jo), Willie Mae, Annette, Bernadine, Janice, and Niecy; a special friend: Sinclair; long-term girlfriends: Carolyn, Bernadette, Jeanette (deceased) Robin, Miles, Ms. Grace (deceased); adopted children: Gail, Gloria (deceased), Mary, Tricia, and Debbie; special nieces: Keristen, and Kamiah; a devoted, caring and committed son-in-law: Milford; and a host of other relatives and dear friends.

Marion Delores Dugger entered this life on March 9, 1940 to the proud late parents of Margaret and Coleman in Petersburg, VA. On Friday, October 22, 2021, God saw the road was getting rough; the hills were hard to climb. Because He knew how... View Obituary & Service Information

The family of Marion D. Hairston created this Life Tributes page to make it easy to share your memories.

Send flowers to the Hairston family.