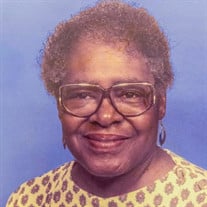 Marian Virginia Lyle Stokeling, was the second of nine children born to the late David and Kisiah Lyle. She was born on December 10, 1928 in Baltimore, Maryland. God took her to her heavenly home on April 16, 2022. She received her education from the Baltimore City Public School System and graduated from Frederick Douglass High School in 1946. She furthered her education at Morgan State University, graduating in 1950 with a Bachelor of Arts Degree in History. Upon graduating, Marian was employed at the Social Security Administration and the Department of Social Services. She left the work force for a few years to take care of her children. She was hired by the United States Post Office in 1963 and retired in 1993 after 30 years of service. On August 10, 1953, she married William Luke Stokeling, Jr. and from this union four children were born: William Luke Stokeling, III, fondly called Billy, Brian Keith Stokeling, Edward Stokeling (deceased), and Patricia Stokeling Winder. Her beloved husband of 55 years, William Luke Stokeling, Jr., departed this life on June 22, 2008. Marian was a loving and caring wife, mother, grandmother, sister and friend. She loved spending time with her grandchildren Monika and BJ, who affectionately called her Booboo. Marian was a faithful member of Elderslie St. Andrews United Methodist Church since 1983, where she served as an usher, counter, liturgist, lay speaker, and served on a host of committees and ministries. She enjoyed traveling, reading, spending time with family, and watching Jeopardy and Wheel of Fortune. Her favorite holiday was Christmas, for which she’d go all out with decorations and gifts. This was a “you’d better not miss” time for Marian. Marian was known to always send greeting cards to celebrate birthdays, anniversaries, graduations, and Christmas, to all of her family, friends, and church members. Everyone wondered how she could remember all of those dates. Marian leaves a legacy of generosity, kindness, thoughtfulness and discipleship. She will truly be missed. he leaves to cherish her memory: two sons, Williams L. Stokeling, III, and Brian K. Stokeling; daughter, Patricia S. Winder (Samuel); two grandchildren, Monika R. Stokeling and William L. Stokeling, IV; one great grandson, William L. Stokeling, V; three sisters, Grace Patterson, Louisa Brown (Edward), and Elissa Williams; two brothers, David Lyle and Joseph Lyle; two brothers-in-law; two sisters-in-law; a host of nieces, nephews, cousins, other relatives, and cherished friends.

Marian Virginia Lyle Stokeling, was the second of nine children born to the late David and Kisiah Lyle. She was born on December 10, 1928 in Baltimore, Maryland. God took her to her heavenly home on April 16, 2022. She received her education... View Obituary & Service Information

The family of Marian Lyle Stokeling created this Life Tributes page to make it easy to share your memories.

Marian Virginia Lyle Stokeling, was the second of nine children...

Send flowers to the Stokeling family.