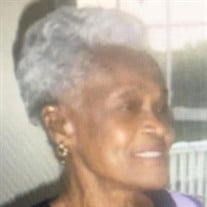 MARGARET ELIZABETH HEPBURN was born on the Caribbean Island of Montserrat to Ellen Smith and John Neal on September 20, 1929. She transitioned from this life to her heavenly home on September 21, 2021. Ruby, as she was called by those who knew her best, began her encounter with adversity quite early in life, having been forced to prematurely end her formal education because of an undiagnosed vision problem. Ironically, as an adult, she became an avid reader and, thereby, continued her informal education, which equipped her to navigate the difficult life that awaited her in the coming years. At the age of seventeen, Ruby immigrated to the Caribbean Island of Trinidad in search of a better life. However, in the absence of a family support system, she struggled to eke out a living beyond the bare necessities for survival. At age twenty, she gave birth to her first child, Carol (who preceded her in death); and, three years later, her second child, Hollis, was born. Fortunately, Ruby was able to find a couple of reliable caretakers for her children while she worked tirelessly to support them and herself. Not long after the birth of her son, she met and married Carlton Hepburn and, from that union, three children were born: Dawn (who preceded her in death), Michael, and Yvette. Margaret Hepburn (a.k.a. Ruby) rededicated her life to the Lord Jesus Christ sometime in the late 1960’s, and became a member of the Morvant Pentecostal Church where she served as an usher, among other things. However, one of her greatest contributions to the kingdom of God was her intercessory prayer, which included her travailing for her children’s salvation. Consequently, she was able to witness the conversion of most of her children and, because of God’s faithfulness, she is guaranteed that they will all be saved. She also celebrated the call of her son, Pastor Hollis C. Neal, into God’s service, and was his most ardent supporter in the early years of his ministry in Trinidad. Moreover, Mother Hepburn became a member of First Charity Baptist Church in the late 1990’s, where she cherished the opportunity to once again participate in her son’s ministry. Before her prolonged illness and her ultimate passing, her presence was a staple at First Charity. Her incessant prayer, words of exhortation and encouragement, and her enormous appetite for God’s word would long be remembered. She leaves to mourn, three children, Rev. Dr. Hollis C. Neal, Michael Hepburn (Trinidad), and Yvette Hepburn (Trinidad); one daughter-in-law, Radenna Neal; nineteen grandchildren, Colin Williams (Houston, TX), Gillian Ray (Springfield, MO), Sheldon Neal Sr. (Baltimore, MD), Sean Neal (Baltimore, MD), Simone Neal (Seattle, WA), Renee Williams (Atlanta, GA), Derrick Williams (Baltimore, MD); also, Nigel, Andre, Seon, Mark, Kwesi, Dwayne, Kermisha, Sherland, Amanda, Kanicka, Tamika, and Mia (all of Trinidad); several great grandchildren, including Jacqui Ray, Jacsun Ray, Dean Williams, Derra Williams, Sheldon Neal Jr. and Madison Neal, all of the United States of America.

MARGARET ELIZABETH HEPBURN was born on the Caribbean Island of Montserrat to Ellen Smith and John Neal on September 20, 1929. She transitioned from this life to her heavenly home on September 21, 2021. Ruby, as she was called by those who... View Obituary & Service Information

The family of Margaret Elizabeth Hepburn created this Life Tributes page to make it easy to share your memories.

MARGARET ELIZABETH HEPBURN was born on the Caribbean Island of...

Send flowers to the Hepburn family.