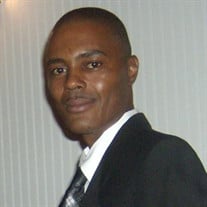 Legacy of Life But they who wait upon the LORD shall renew their strength; they shall mount up with wings as eagles; they shall run, and not be weary, and they shall walk and not faint. Isaiah 40:41 Marcel Earl Robinson, Jr., was born in Richmond, Virginia on February 20, 1969. He was the oldest of five children in the union of the late Marcel Earl Robinson, Sr. (Carolyn), and Geneva B. Robinson. “Boo” as he was affectionately known, was educated in the public schools of Richmond, Virginia and graduated in 1988 from John Marshall High School. He soon joined the United States Army Reserves which earned him many accolades including the Meritorious Service Medal, Army Commendation Medal (2nd award), Army Achievement Medal (4th award), and Global War on Terrorism Service Medal to name a few. During his military service, he was employed by Healthcare Management Systems as a business office manager. With an honorable discharge and 26 years of service, Marcel pursued another career with FedEx Ground as an Operations Coordinator while simultaneously completing his bachelor’s degree from Columbia Southern University. He was an avid fan of America’s Team, the Dallas Cowboys. He was taught at a young age to keep God first, work hard, and maintain a strong foundation of family, morals, and ethics, instilled by his parents. Marcel loved and adored his family immensely and next to God, they were at the top of his most important priorities of life. He was a provider, a mediator, a demonstrator, and most importantly an imitator of Godly Character. He was married to the former LaTonya Elizabeth DeLee in 2008. To this union, a loving family was established: Ryan, Brianna, Aaron, Milan, and Marcel III. On Wednesday, April 27, 2022, The Lord whispered to Marcel that heaven needed another angel and he was the most prepared at this time. He took God’s hand, received his wings, and said, “Yes, My Lord, I am honored to accept the task.” Marcel leaves to cherish precious family memories, a loving, devoted and caring wife of 14 years, LaTonya E. Robinson; five children, Ryan (Monique) DeLee, Sr., Moncks Corner, SC; Brianna (Austin) Williams, Chesterfield, VA; Aaron Adkins, Dorchester, SC; Milan Robinson, Richmond, VA; and Marcel Robinson, III, Richmond, VA; two grandchildren; Ryan DeLee, Jr., Jordan DeLee and Mia (fur baby); his mother, Geneva B. Robinson, Richmond, VA; one sister, LaFawn Robinson, Richmond, VA; three brothers, Eric (Virginia) Robinson, Sr., Richmond, VA; Michael (Cara) Robinson, Richmond, VA; Larry (Shateka) Robinson, Sr.; his mother-in-law, Theresa DeLee, Dorchester, SC; sister-in-law, Galana DeLee, Dorchester, SC; brother-in-law, Elijah (Luella) DeLee, Jr., North Charleston, SC; and a host of aunts, uncles, nieces, nephews, and cousins.

Legacy of Life But they who wait upon the LORD shall renew their strength; they shall mount up with wings as eagles; they shall run, and not be weary, and they shall walk and not faint. Isaiah 40:41 Marcel Earl Robinson, Jr., was born in Richmond,... View Obituary & Service Information

The family of Marcel Earl Robinson, Jr. created this Life Tributes page to make it easy to share your memories.

But they who wait upon the LORD shall renew their...

Send flowers to the Robinson, family.