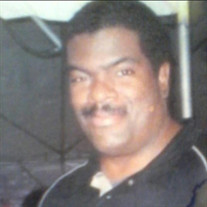 MARC ELZEE GLADDEN. was born on June 22, 1963 in Baltimore, Maryland to the late Elzee and Jessie Gladden. He was called to rest on Tuesday, May 25, 2021. Marc received his early education in the Baltimore City Public School System. He attended Hilton Elementary School, Fall Staff Middle School, and Northwestern High School. Upon graduating from High School, he attended and graduated from Morgan State University. At Morgan, he was a part of the Math, and Computer Science Program. He graduated with a Bachelor of Science degree in Math and Computer Science. He also obtained a dual Master’s Degree in Human Service Administration from the University of Baltimore and Coppin State University. Marc began his professional career working at the Revisions Medical Day Care and Mental Health Rehabilitation Center in Catonsville, Maryland. He then became an IT (Information Technology) Specialist / Tech Support for Baltimore City Public Schools. Soon thereafter, he became a Baltimore City Public School teacher specializing in Computer Science education and IT Support. He later left the school system to begin a professional career in real estate investing, property ownership and management. Marc’s commitment and dedication to his tenants was very important to him. The value of providing them with housing that made them feel at home was a priority. He was a compassionate to many. Marc was raised in a family with strong Christian values. In addition, his parents instilled in him the importance of education, social justice, community involvement, and the betterment and advancement as a people. As a child, his Christian foundation began at The New Pilgrim Baptist Church under the pastor Reverend Black.; there he was a junior usher. As an adolescent, he and his family moved their membership to The First Baptist Church of Baltimore. There, he worshipped with his family for many years under the direction of The Reverend Dr. Robert M. Johnson, Sr., Pastor. In later years, he practiced the Apostolic and Holiness Faiths. Marc was a true Baltimorean; he loved baseball and was a diehard Orioles fan. He played Little League Baseball as a Junior Oriole, as a Pitcher. He enjoyed many outings to baseball games with his father, his cousins, and his Uncle Joe. He loved a good hotdog with all the fixings, a big bag of popcorn, peanuts, and an ice cold Coke, “To wash it all down!” Going to the baseball games made many special memories. One unforgettable baseball outing was when Orioles player Eddie Murray hit a home run at Memorial Stadium and Marc and cousin Robert jumped up in excitement when they saw the ball coming their way; Marc caught the home run ball! The family was so excited. Upon leaving the stadium early in the ninth inning, Lee May hit a home run into the bleachers and Robert retrieved that ball; the two rejoiced! Later on as a sportsman, he joined a competitive bowling league. He enjoyed sharing bowling with his sister Lisa. Marc would always share an encouraging word, followed by his genuine laughter. Through a loving union with Karen Lambert, Marc became a proud father on June 28, 1989, his son Jonathan Marc Gladden was born. Marc has had so much pride, joy and admiration for his son’s accomplishments and the great person and man he has come to be. Marc leaves to cherish his memory: his son; Jonathan M. Gladden; his daughter-in-law, Saraya (Thomas) Gladden; and his sister, Senator Lisa A. Gladden, Esq. He has a host of aunts, uncles, cousins, family and friends that will miss him dearly.

MARC ELZEE GLADDEN. was born on June 22, 1963 in Baltimore, Maryland to the late Elzee and Jessie Gladden. He was called to rest on Tuesday, May 25, 2021. Marc received his early education in the Baltimore City Public School System.... View Obituary & Service Information

The family of Mr. Marc Elzee Gladden created this Life Tributes page to make it easy to share your memories.