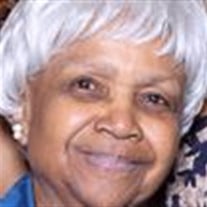 Madeline Vivian Spicely Forrest, the youngest of Fannie Mason Spicely’s five children, was born February 20, 1924, in Blackstone, VA. Madeline’s two older sisters, Lois and Lillian, were born of the union of Fannie to Emmitt Smith. Madeline and her two older brothers, Daniel A. and Alvin were born of the union of Daniel A. and Fannie Mason Spicely. In Blackstone, Madeline attended grade school at Nottaway Training and High School, the school that educated the Black children during that time. At the age of 10, Madeline told her pastor she wanted to be baptized, and so she was! Madeline was a woman of deep faith. She was a proud member of St. Marks on the Hill Episcopal Church for many years and faithfully received Communion while living at her Charlestown Senior Living Community until 2019. She was passionate about the work she did, year after year, for the church’s famous coffee hours, where parishioners gathered and broke bread. Under Madeline’s leadership,this event was ‘the’ gathering after church every Sunday. Madeline’s father Daniel, in partnership with his brothers, owned a Blacksmith shop where they manufactured the metal ring parts of wagon wheels, shoed horses and produced other metal machine parts. When Madeline’s parents separated, her mother worked as a domestic in Washington, DC. Madeline then attended school in Washington, DC and lived with her sister Lilian and husband. When Lillian later decided to relocate to Boston, strong-willed Madeline, signed herself out of school without permission to follow Lillian. Madeline was a wise woman of many talents. In 1941, right after the start of WWII, Madeline went to and graduated from an integrated Roxbury Memorial High School in Boston. During the WWII draft, the government recruited high school girls to test for eligibility for technical school scholarships. Young women were needed to fill jobs left vacant by men drafted for war. Madeline passed the test and went to Northeastern University to study drafting on a full scholarship. Later, she went to MIT for advanced engineering and drawing. At the start, there were 18 white men in the class with her. She was the only female and the only black in the class. If you knew Madeline, you know she walked into that classroom every day with her head held high, without fear or intimidation. She watched those young men steadily leave as they were drafted for war. By the end of the class, she was the only one left. She earned her certification. Madeline’s tech school instructor was instrumental in getting her first job. She worked with the government where she reviewed plans and ordered submarine parts. She only later realized what an exceptional opportunity that was. Later she held a position where she checked machined parts. She read blue prints and quality checked thousands of pieces. She also worked at the Watertown, MA Navy Yard. In Roxbury, Madeline went to a local party where she met her future husband, Edward Forrest. Within a couple years, September of 1947, they wed in Stoughton, MA. ‘Eddie’ acquired a teaching position in Baltimore where they made a home and lived for many years. Three years into their marriage, on January 13, 1950, their beloved son and only child, Eryk was born. Their son, Eryk was truly her joy. Sadly, Eryk passed away at the tender age of 23, July 2, 1973. One day Eddie noticed an article in the newspaper offering a college scholarship for people who didn’t go straight to college after high school. Eddie looked up from his paper and delivered a life changing challenge to Madeline. With levity, Eddie said ‘I bet you can’t do this.’ Madeline took on the challenge, took the test, passed it and resigned from her job. She had a choice of attending Goucher or Johns Hopkins. As a full time parent, she completed 4 years at Goucher College in Towson, MD where she acquired her bachelor’s degree. Madeline’s first teaching position was at Douglas HS in Baltimore where she taught Physics for 5 years. Her career in education continued another 15 years until she retired from Baltimore Polytechnic HS. Madeline was a strong, wise woman. She was a great Aunt, a good neighbor and friend. After retirement, she learned to play tennis and came to love the game. She played into her 70’s. She started a tennis program for young people at her local park which is still running to this day. In 2002, after 55 years of marriage, Eddie passed away. Madeline remained in their Cheswolde home for another 7 years before moving to Charlestown, a lovely, all-inclusive senior community in Catonsville, MD. She finally surrendered to what Eddie had been suggesting for years and she was so glad she had. In addition to her beloved husband and son, Eddie and Eryk respectfully, Madeline was predeceased by her parents, Daniel A. and Fannie Mason Spicely, two sisters, Lois and Lillian, two brothers, Daniel A. and Alvin and niece Joncier. She frequently spoke of her good and blessed life. She was in awe she lived such a long life and was the last left of her generation in her family. Left to miss her are her nieces and nephews, Jessie, Fannie, Nathaniel and Jimmy, and a host of great nieces, nephews and friends.

The family of Madeline V. Spicely Forrest created this Life Tributes page to make it easy to share your memories.

Send flowers to the Spicely-Forrest family.