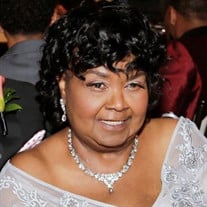 Lynda Gayle Owens-Ford was born in Elizabethtown, North Carolina on June 16, 1956 - the youngest child and only daughter of the marital union of Eunice Bryant and David Owens. Although she spent her formative years in North Carolina, she would relocate to Richmond, Virginia as a teen. After attending John Marshall High School, Lynda would devote most of her time to raising her children. Despite being a single mom of four who worked multiple jobs and refused public assistance, she managed to be a fixture at her children’s football games, spelling bees and math whizzes. She birthed four children, but so many more claimed her as their own - referring to her affectionately as “Mama O,” “Mama Lynda,” “Big O” and “Mom Owens.” Her love for children also guided her professional career as she was employed for many years by the Richmond Public School System finishing her career as the Executive Director of the Carver Promise, a program that pairs students from a Title I elementary school with local college students to provide mentoring and educational support. The spiritual foundation laid by her grandparents would be a driving force in her life and she would earn a degree in divinity from Virginia Union Theological Seminary. She was ordained as a minister at Greater Mt. Moriah Baptist Church, where she served many years as an Associate Pastor. During her latter years, she joined Beulah Baptist Church and served in several capacities, including as an Associate Minister and member of the Missionaries and Food Bank ministries. Lynda was also passionate about her community, which resulted in her receiving numerous awards, including the Norman Vincent Peale Award for Positive Thinking, the “She Persisted” Award from My SisterCare and the Distinguished Service Award from Savannah A.M.E. Zion Church. Her passion would lead her to run for the Virginia House of Delegates as a major party candidate with endorsements reflective of the widespread support and influence she had in her community. She was also a member of the Order of the Eastern Star. Lynda was preceded in death by her parents, sister Sandra Matthews, daughter Aljawanna “Nicole” Owens and son Solomon M. (“T-Boo”) Owens. Lynda leaves to cherish her memory: her best friend and husband John Ford, a loving daughter LaTisha Owens Tarrant (Shawn), a devoted son Larry Owens, a brother Solomon Owens, Sr. (Judy), stepchildren, grandchildren, nieces, nephews and a host of other relatives and close friends.

Lynda Gayle Owens-Ford was born in Elizabethtown, North Carolina on June 16, 1956 - the youngest child and only daughter of the marital union of Eunice Bryant and David Owens. Although she spent her formative years in North Carolina, she would... View Obituary & Service Information

The family of Lynda Gayle Owens-Ford created this Life Tributes page to make it easy to share your memories.

Send flowers to the Owens-Ford family.