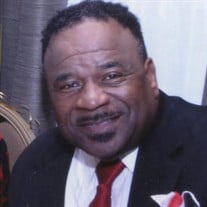 Pastor Luther Archer, Sr., son of Lieutenant Archer and Eunice Brown Mayfield Archer, was born on November 23, 1945, in Petersburg, Virginia. He was called home to be with the Lord on June 18, 2021. He was preceded in death by his parents and his sister, Dorothy L. Botts. Pastor Luther, as he was affectionately known, publicly confessed Jesus Christ as Lord and Savior at an early age and was baptized at Refuge Church of Our Lord Jesus Christ in Petersburg, VA under the leadership of Bishop Floyd Hill, Sr. Thereafter, he began to run his race of faith, excelling in commitment to not only sharing the Word of the Lord, but also in exemplifying the fruit of the Spirit in both his walk and his talk. He was recognized locally for his pioneering efforts in the spiritual growth and development of individuals and his longstanding pastoral leadership. He received his early education in the City of Petersburg Public School System. With a commitment to fulfilling God’s plan for his life, he continued on as a scholar extraordinaire in religious studies and leadership. As a lifelong avid learner passionate about sharing the unadulterated Word of God, he attended many institutions of higher learning such as the Central Virginia School of Ministry, the Temple Bethel Jewish Synagogue, the Elijah House Training for Prayer Ministry, the American Association of Christian Counselors, and the Billy Graham School of Evangelism. Academically accomplished, Pastor Luther accrued a long list of diplomas, certificates, and advanced degrees, including but not limited to: BA-Biblical Studies; MA-Christian Counseling/Psychology (Carolina University of Theology); MA -Theology (Oral Roberts University); and was currently in pursuit of a Doctorate in Theology (Oral Roberts University). Often introducing himself as a heralder of the Word of God, he followed the Jabez call on his life for kingdom work and an enlarged territory resulting in international missions and ministry. His work in missions took him to Ghana, Nigeria, Kenya, Romania and India where hundreds of souls were led to Christ. In addition, he also attained an extensive leadership portfolio that included pastoring positions in the House of Prayer, Chesterfield (now Hope Point Church), the New Hope Assembly, Refuge Assembly of Yahweh, and founding and Senior Pastor of Shepherd’s Heart Christian Fellowship. Though he was well-educated, he did not boast of these achievements, but rather, as an ambassador for Christ, he boldly declared the greatness and faithfulness of our God. He married Carolyn Dianne Smith in August 1988, and together they embarked on planting and watering in the vineyard. Honoring the vision given to him by God to go into the city, he and Carolyn founded Shepherd’s Heart Christian Fellowship in October 2007. Under his leadership and strong belief in the five-fold ministry, the principles of Grace, Faith, and Transformation were in full operation and miraculous signs and wonders occurred. Numerous lives were impacted by his teachings, ministry of healing and deliverance, and evangelical outreach initiatives. He sounded the clarion call for a harvest of souls, salvation, and the reality of access into the realm of our supernatural God. The Lord also directed him to ordain and train four Elders to assist in shepherding the flock and equipping the saints. Even during his health challenges, he continued to stand on the promises of God, to mentor, to speak faith words, and to pray a special blessing over those under his umbrella of care as he never ceased to glorify God. Indeed an anointed man after God’s own heart, Pastor Luther will also be remembered for his infectious laughter, his beatific smile, his magnanimous heart, his taste for chicken, and the fact that he never met a stranger. If you ever visited the church where he pastored, he claimed you! He sincerely loved God and he loved people in an inclusive manner. He leaves to cherish precious memories his loving and devoted wife, Carolyn Dianne Archer; sons: Luther Archer, Jr. and Rodney Archer, of Richmond, VA; and D’Angelo (Michael Eugene Archer); step-sons: Rudolph W. Smith, Jr. of Leawood, KS and Zuriel J. Smith of Richmond, VA; step-daughter: Sherita D. Smith of Hanover, MD; brother: Elder Eddie Archer (Sylvia) of Richmond, VA ; sister: Ann Johnson of Spring, TX; brother-in-law: Attorney David Lett of Henrico, VA; sisters-in-law: Wilda Worsham and Evangeline Henderson both of Richmond, VA; 4 grandchildren; numerous nieces and nephews; three special nephews: Ralph Johnson (Spring, TX), Ronald Wriley (Charlotte, NC), and James Kirby Botts (Richmond, VA); devoted spiritual sons Pastors David McGhee and Kevin Meade, Sr.; a devoted friend of 57+ years, Pastor Lawrence Wilson; and the devoted elders (Jacqueline Coleman, Von Tisdale, and Mike West) and family of Shepherd’s Heart Christian Fellowship.

Pastor Luther Archer, Sr., son of Lieutenant Archer and Eunice Brown Mayfield Archer, was born on November 23, 1945, in Petersburg, Virginia. He was called home to be with the Lord on June 18, 2021. He was preceded in death by his parents and... View Obituary & Service Information

The family of Pastor Luther Archer Sr. created this Life Tributes page to make it easy to share your memories.

Send flowers to the Archer family.