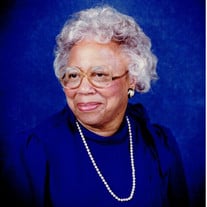 Louise Smith ,97, of Highland Springs and formerly of Charles City, VA, departed this life on November 16, 2021. Louise was born in Philadelphia, PA on June 7, 1924 to her birth mother. Percella Tyler Cotman. She was placed in the care of Robert and Martha Jones of Charles City at the age of 2 months. Louise was reared as the adoptive daughter of the Joneses until her mother, Martha, died in 1937. At the age of 13, she went to live with her sister and brother in law, Sarah and Alexander Bradby. They were loving, nurturing parents to her and provided her with what she described as a “wonderful childhood”. As a child, Louise attended Little Elam Elementary School. At the age of nine she was baptized and joined Little Elam Baptist Church. By all accounts, she was a bright, positive and polite young girl. These were early characteristics that helped her overcome many challenges in her later life. In 1941, Louise graduated from Ruthville High School. Her report cards show that she had outstanding attendance, missing only four days in four years. She was also graded highly on her conduct, work ethic and recitation skills Algebra, however, seemed to be a bit of a challenge. Louise was unable to fulfill her dream of going to college and becoming a teacher. She was a lifelong learner and eventually earned a certificate in Early Childhood Education from John Tyler Community College in 1990. In 1944 at the age of 20, Louise gave birth to her first child, a girl, whom she named, Doris Ann. Louise would later exclaim to her other children that Doris was a “beautiful baby “. She would say, “All of you were cute, but Doris was beautiful “. The two of them, Louise and Doris created a remarkable bond that lasted for over 77 years, one of Louise’s first jobs was as a housekeeper at River Edge Farm. It was here that she met a charming young soldier in 1946. After a brief courtship, Louise and James G. Miles , Jr. were married on October 26,1946. During their ten year marriage they became parents to four children., Evelyn, Barbara. Brenda and Robert. A caring and doting mother to all of her children, Louise had a particular adoration for her son. Her face would light up with pure joy at the sight of Robert. After a divorce in 1958, Louise spent the next several years working outside of the home in order to provide for her children. She had the good fortune of having Sarah and Alex Bradby willingly and lovingly provide a home for her and her children , keeping the family together with love and laughter. For several years, during her “single” life, Louise enjoyed the companionship of the late James Nimmo Christian. He was a kind man who always respected her and her children. Louise was also committed to civic engagement throughout her life. She was an active member of the NAACP and served on the Board of Directors of the Quinn Rivers Community Action Agency . She was a lifelong voter, even during the times of the onerous poll tax and voter literacy tests. She helped integrate the sales staff at both Miller and Rhoad’s and Casey’s department stores. In 1981, Louise found love again and married James Alexander Smith. Their union lasted until his death in 2000. She was an excellent homemaker and served as a caregiver to Alex when he became disabled. She joined Parrish Hill Baptist Church and remained a member until she moved away from the neighborhood. Her ties to Alex’s family include his surviving children Wanda Washington and Myra Smith and Alex’s siblings Corrine Battle, Jackie Smith and Carl Smith. Alex’s grandchildren and great grandchildren still refer to her as “Grandma”. Louise was outstanding in many areas like gardening and fashion coordinating . But there were some things that she never learned to do. She never learned to drive, but she could always get a ride. She was also excellent at giving directions on how to get to any location, and often did so from the back seat. She could never sing or dance, but she could recite six or seven verses of poetry without hesitation. She could never make a biscuit , but her potato salad was to die for! Finally, Louise could never keep a secret. If she knew it, she told it. She would say, “I might as well tell, you because you are going to find out anyway “. Louise loved people. She wanted to know all about them. In another life, she would have made an excellent news reporter or interviewer. Louise will be sorely missed by her friends. She loved having visitors. When her old friends died, she found new ones. In recent years, she was visited frequently by Beverly Tyler, Portia Jones, Rita Washington, Lorene Jones(a lifetime friend) Susan Miles and Agatha Porterfield. She also had constant and faithful friends in Ann Tabb and Patricia and Lonnie Janes. Louise’s legacy of love, include Doris Ann Charity and Melvin Lane(with whom she lived for 17 years);Evelyn Miles Giebel and Gregory Giebel,;Barbara Miles Lewis and Elwood Lewis,; Brenda Miles Lee and Norbert Lee; and Robert A. Miles. She also leaves 5 granddaughters; Shana Dandridge, Yashica Green, Alexis Jones,Branden Lewis and Kristin Cosby. The next generations include 8 great grandchildren, and one great-,great grandchild. Louise also has through her marriage and the marriages of her children, several step grand and great grandchildren, many of whom refer to her as Mama Lou.

Louise Smith ,97, of Highland Springs and formerly of Charles City, VA, departed this life on November 16, 2021. Louise was born in Philadelphia, PA on June 7, 1924 to her birth mother. Percella Tyler Cotman. She was placed in the care of Robert... View Obituary & Service Information

The family of Louise Miles Smith created this Life Tributes page to make it easy to share your memories.

Louise Smith ,97, of Highland Springs and formerly of Charles...