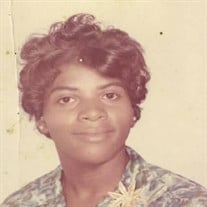 LOUISE MCCLELLAND, daughter of the late Elizabeth Allen and John Allen, was born on January 24, 1947, in Baltimore, Maryland. She departed this life on March 9, 2022. Louise was baptized at Morning Star Baptist Church, on Fayette Street. She was educated within the Baltimore City Public School System, and she graduated from Edmondson High School in 1965. Her formative years in high school were the foundation that prepared Louise for her employment within the environment of the Social Security Administration. As a claimant authorizer, Louise was known as a dedicated and esteemed worker among all of her co-workers and associates. One of those co-workers is her best friend Rosalita Stone, and their relationship existed for over thirty years. Rosalita loved Louise like a sister, and they both could depend on each other if they needed someone to be there, especially through life’s good and bad times. Louise McClelland spent many of her days reading a plethora of mystery novels, written by many esteemed female authors, such as Kristi Holl, Nancy Mehl, and Christy Barritt. She also spent her time donating to her favorite charities such as the American Diabetes Association, and the Special Olympics. When she wasn’t fine dining at one of her favorite restaurants, Louise also spent her time catching up on her favorite television shows such as Matlock, Law and Order: SVU, and In The Heat of the Night. Louise McClelland was love and light. She was gentleness in word and spirit. She always embraced ideas, gave encouragement, and always offered a listening ear. Louise possessed a giving spirit to anyone that needed help and was always there to support all of her family and friends. Preceding her in death is her son, Kelvin McClelland; her sisters, Martha Price, Magdalene Howard, May Allen, and Genevieve Allen; and her nephews, Henry Allen and Randy Price. She leaves to mourn: her sister, Rose Allen; her brother, James Allen; her nephews, Bernard Allen, and his wife, Denise and Tyrone Allen; her best friend, Rosalita Stone, and a host of other close family and friends

LOUISE MCCLELLAND, daughter of the late Elizabeth Allen and John Allen, was born on January 24, 1947, in Baltimore, Maryland. She departed this life on March 9, 2022. Louise was baptized at Morning Star Baptist Church, on Fayette Street. She... View Obituary & Service Information

The family of Louise McClelland created this Life Tributes page to make it easy to share your memories.

LOUISE MCCLELLAND, daughter of the late Elizabeth Allen and John...

Send flowers to the McClelland family.