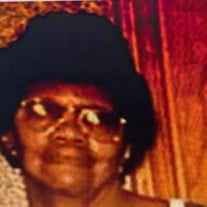 Obituary Louise Carter Doswell, daughter of the late Frank and Millie Watson Carter, was born on April 15, 1916, in Burkeville, VA. She was called to her eternal rest on January 1, 2022. Louise was educated in the local school system in Virginia. She graduated from high school in Richmond, VA. Louise accepted Christ at an early age and was baptized at Mt. Zion Baptist Church in Burkeville, VA. Louise joined the Usher Board and served faithfully. It was at church where she met her late husband, Charles T. Doswell. From this union, there were three children, Carolyn, Ronald, and Steven. Louise and her husband relocated to Baltimore, Maryland. They made sure all their children were well educated. Their children all received a master’s degree. Louise joined a local church in Baltimore and once again served on the usher board for many years. Before her health declined, she joined Abundant Life Missionary Baptist Church. Louise was a diligent worker. She held various jobs over the years. The one she held the longest was a Sales Clerk at Lerner, a women’s store in Mondawmin Mall. Louise also worked at Union Memorial Hospital as a Medicare Counselor and at the Better Business Bureau as an Information Clerk. She retired and then decided to embark on another career. She became a Certified Home Attendant, graduating at the top of her class. She worked in this capacity until she retired for good. Louise enjoyed traveling. She went on cruises and traveled to many states. She frequently visited New York to see family. Louise was a loving, nurturing mother and a wonderful, caring big sister. She saw her siblings as her responsibility and was an excellent role model in every way. She had a profound sense of humor and could really make you laugh. Louise leaves to cherish her memory, one son, Ronald, one sister Lois Smith of New York, three grandchildren, nieces, nephews and other relatives and friends. Two children and eight siblings preceded her in death.

Obituary Louise Carter Doswell, daughter of the late Frank and Millie Watson Carter, was born on April 15, 1916, in Burkeville, VA. She was called to her eternal rest on January 1, 2022. Louise was educated in the local school system in Virginia.... View Obituary & Service Information

The family of Louise Doswell created this Life Tributes page to make it easy to share your memories.

Louise Carter Doswell, daughter of the late Frank and...

Send flowers to the Doswell family.