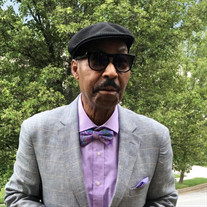 Louis Harris was born in Bethune, South Carolina to Carrie Harris and Author Watts on February 19th, 1927. His early education was in Bethune South Carolina and was completed at Dunbar High School in Baltimore, Maryland. His work career began at a young age ranging from transportation to security which culminated in his more than 40 years at Louis Dreyfus Shipping Company as a Control Module Operator. After marrying Virgie and having three children, he later met and married Marcell McKay and this union produced six children. Louis Harris lived a full life where he worked hard, played hard and one of his greatest joys was getting dressed in his best duds and going out with his wife. His first commitment was making sure everyone in his sphere was well taken care of. He was a wonderful cook, and his southern fried chicken will forever be missed. Louis dedicated his life to the upbringing and protection of his children. Louis was actively involved in the lives of everyone around him, making sure you got to where you needed to go, whether by providing words of encouragement, clarifying issues or physically taking you where you needed to be. He was well respected and everyone that he met was left with a feeling of well-being as if their lives were touched by an angel. He was kind beyond words, and he would give you his last and do without. He was a man of strong character and moral rectitude. Most of all he believed in God. His “lord have mercy” and “good God all mighty” was not just a blight saying but an actual expression of his relationship with his God. On September 3rd, 2021. Louis succumbed to a sudden bout of illness and passed away at Northwest Hospital. Louis left to cherish his memory; his wife, Marcell (Peaches), his children Albert, Tyrone, Patricia, Fasha, Faldon, Fendi, Franz, Farnell and Faymagh. Five grandchildren, seven great-grandchildren, seven great great-grandchildren. Five sisters in law, three brothers in law and a host of other relatives and friends. May his soul rest in peace.

Louis Harris was born in Bethune, South Carolina to Carrie Harris and Author Watts on February 19th, 1927. His early education was in Bethune South Carolina and was completed at Dunbar High School in Baltimore, Maryland. His work career began... View Obituary & Service Information

The family of Louis Harris created this Life Tributes page to make it easy to share your memories.