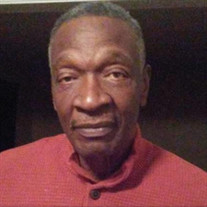 The sunrise of LOUIE LIVINGSTON SR.’s life was on October 11th, 1946 in Baltimore, Maryland to his parents, Alice Livingston and David Livingston Sr. of Orangeburg and Columbia, South Carolina. Louie Livingston Sr., age 75 of Baltimore, Maryland, died peacefully Sunday, January 30th, 2022 after experiencing an illness. He received his education in the schools of Baltimore City, Maryland. Louie immediately joined the United States Army on October 14th, 1963, only three days after his seventeenth birthday, with a desire to serve our country, and provide for his parents and siblings. In 1966, Louie married Melinda Livingston in Baltimore, Maryland and to that union two sons, Louie Livingston Jr. and Troy Livingston were born. In addition, to Louie’s two sons, his daughter, Terica Gilliard was born. After Louie’s honorable discharge from the United States Army he continued his trucking career with McCormick and UPS. Thereafter, Louie’s hunger for trucking led him to his very own company, Livingston Trucking. His thirst for trucking was obtained from his Uncle Willie of South Carolina. Louie ultimately retired as an owner operator many, many years ago after maintaining up to five trucks at one time. While he truly enjoyed teaching others the life of trucking, including maintenance, he certainly did not overlook the important teachings to his own children. With true enjoyment, all three of his children zealously obtained their own commercial driver’s license and joined the life of trucking. Louie and a friend, Andy, were always adamant about the discussion of trucking - especially those Kitty CAT motors! Louie’s expertise was reflected in the abundant calls over the years from his children, family and friends for his expertise. While trucking, Louie even assisted many truck drivers with their taxes - yes, their taxes! Some of his hobbies were playing card games, trucking, spending time with family and friends. He leaves to cherish his memory: his three children, Louie Jr., Troy and Terica; three grandchildren, Takira (Charles), Malea and Miyah;five great-grandchildren, Jayden, Charles Jr., Cameron, Charley, and Jarahd; a loving sister Mary Alice Livingston; sister-in-law, Joanne Livingston (Keiser); brother-in-law, Bill Durant (Joyce); and a host of nieces, nephews, cousins, other relatives and friends. Louie was predeceased by his mother, Alice Livingston; his father, David Livingston Sr.; his ex-wife, Melinda Livingston; his sisters, Loretta Wright, Anne Livingston, Ruth Brown, Joyce Durant; and his brothers, David Livingston Jr., Bernard Livingston and Keiser Livingston.

The family of Louie Livingston Sr. created this Life Tributes page to make it easy to share your memories.

The sunrise of LOUIE LIVINGSTON SR.’s life was on October
11th,...

Send flowers to the Livingston family.