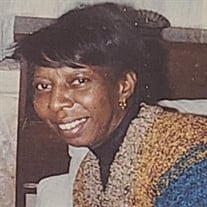 On Thursday, June 3, 2021, God called Loretta Deloris Johnson Ellerby to eternal rest in Christ. We celebrate and honor her life. Loretta was born on March 19, 1943, in Baltimore, MD, to the late Blanche Elizabeth Kea Johnson and Coy Lester Johnson, Sr., of Edgecombe, County, North Carolina. She was the second eldest daughter, born after her sister, Lucy and before sister Cynthia, brother Coy, Jr., and sister Lorain. She was educated in the Baltimore City public schools and graduated from Frederick Douglass High School in 1961. After graduating, Loretta attended cosmetology school and worked in a few salons before becoming a "kitchen beautician" and part of an enduring African American entrepreneurial legacy. Around that time Loretta married James Ellerby, Sr., of Baltimore, MD. Out of that union, two sons were born: James Lester Ellerby, Jr., aka Jim Jim, and Anthony Boris Ellerby. Loretta joined and was baptized at Zion Baptist Church and later joined New Elizabeth Baptist Church. She had a natural talent for decorating and loved cooking for her family and friends. Over the years, she worked as a security guard and for CAFORO, a black-owned fabrications business. She also worked at several nursing homes before moving home with her aging father, Coy, Sr. Loretta was a loving, compassionate, caring, and generous woman. She was witty, sharp, and possessed keen insight into people. There was very little that you could pull over Loretta's eyes, which is why she was such a formidable card shark. Most of all, Loretta was a people person who loved a good time and a good party! In her younger days, she could dance the wax off the floor. She loved music and at one point had an impressive collection of 45 records. She also loved pretty things and getting dressed up to the 9s with nails beautifully painted. Loretta was loved and cherished by her family and friends and will be greatly missed. She is preceded in passing by her parents Blanche and Coy Johnson; sisters Lucy Partlow and Cynthia Jones. She leaves to cherish her memory: two sons, James (Majoria) and Anthony (Donna); brother Coy, Jr., and sister Lorain; sister-in-law Arnetta; brother-in-law Calvin; 3 grandchildren, James Anthony, III (Rebecca), Jasmine, and McKenzie; Goddaughters Sharon and Simone; nieces Lenett, Kimberly, Sharon, Trinita, Taihera, Lenora and Tara; nephews Rodney, Barry, Cory, Darnee, Coy III, and Troy; 26 grand nieces and nephews: 7 great-grand nieces and nephews; best friend Shirley; and lots of other devoted friends and relatives.

The family of Loretta Delores Ellerby created this Life Tributes page to make it easy to share your memories.

Send flowers to the Ellerby family.