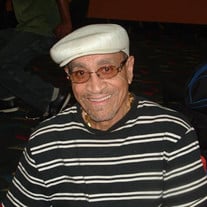 Lonnie Timmons, Jr.'s life journey began in Pamplico, South Carolina on August 12, 1934. He was the son of the late Lonnie Timmons Sr. and Daisy Timmons Wilson. He was their middle child and only son. His close-knit sibling group included Doris Lee Timmons Tuggle and Zelma Donnella Timmons Holmes. They were blessed to have a special bond with their cousins, Mary Lee Bostic Graham and Dorothy (Dot) Bostic, also from Pamplico, South Carolina. The bond remained until the death of Doris, Mary Lee and now Lonnie. Lonnie attended public school in Pamplico and began to work at a very young age His sister Zelma, loves to share the story of how her brother would work on their grandfather's farm. He would push the plow but could barely operate the machine because he was so short. Still, he endured the tasks that were expected. Through his teen years, Lonnie continued to work in the fields until he was finally allowed to leave Pamplico. Thanks to his childhood friends, the Belin family, with a sibling group of ten, five males and five females, Lonnie gained some brothers and sisters. The five Berlin brothers transitioned to Baltimore, Maryland at different times. One of the brothers, Bill (Moses) appealed to Mother Daisy and begged for Lonnie to leave Pamplico. He promised to guide and protect Lonnie. With much hesitancy Mother Daisy allowed her son to leave. Roy Belin, the middle Belin brother, helped looked out for Lonnie and taught him how to take on the responsibility of seeking and obtaining employment. Lonnie also learned how to share in the responsibility of paying bills, being neat with his appearance and clothing styles while maintaining a dependable work ethic. Throughout his life's journey, Lonnie worked as a cab driver, magazine delivery guy, warehouseman for the Kroheim Liquor Distillery from where he retired after 30 years of servie. Lonnie worked in the grocery store owned by the Belin brothers as assistance was needed until the store was sold. He also did Landscaping work part time for years to help support his family. He was meticulous about keeping his grass cut. It has been told that Lonnie was a charmer amongst the ladies. He met and charmed Mary Lee in 1954, who lived in the same community They dated for over two years before they married. They were married for 50 years until her death in December of 2006. From that union, four children were born: Valerie, Dianne, Jacqueline (Jackie) and Lonnie III (Timmy). Together, they raised their children and trusted God for provision and protection. Lonnie remained very sociable. He had a special group of friends that enjoyed pool, cards and live music. Lonnie acquired several nick names. As a child, he was called "Bubba." Upon coming to Baltimore many friends called him "Sammy." They fantasized that he looked like Sammy Davis Jr. The Timmons siblings could never get that connection!! Salute to the many friends and associates that Lonnie built over the years, the majority of whom preceded him in death. The few that remain were special supporters. Kudos to Mr. Teddy for the consistent support that he provided to Lonnie throughout the many, many years that they remained friends. That was a special connection that Lonnie missed when Teddy became ill. Shortly, thereafter, Lonnie's health declined and reduced his mobility. Lonnie was raised in church from his roots in South Carolina. Later in life, he returned to church with his wife, Mary, at New Freedom Baptist. There, they received the support of their church family members and Pastor/Bishops. Throughout the young years of his children, he would attend events at church to support them. Lonnie supported his children's dreams, goals and aspirations. He wanted them to have the opportunity to excel and become independent, No matter their life choices, the support remained until his death. No matter in what capacity you knew Lonnie, know that he was most comfortable with his South Carolina roots. He remained supportive of returning to South Carolina and visiting his family and friends. When, he reconnected with his dad, who resided in New Jersey, that family bond remained important. Lonnie enjoyed vacationing with his wife, Mary, sister, Zelma, and brother-in-law, Joseph Holmes, Sr. They were blessed to visit Europe, Hawaii, enjoyed many cruises and other cities throughout the United States. The same travel team attended the Family Reunions of the Eatmon Family and the Timmons Family. On Wednesday, July 21, 2021 Lonnie departed this earthly realm. He and Jackie had talked to each other around 4:00 am. They engaged in an exchange of I love you! Just checking to see if you are comfortable. Lonnie told Jackie "I'm glad you came to check on me.!" At approximately 7:00 am, Lonnie transitioned! To God be the Glory! Lonnie leaves to cherish his memory his children: Valerie, Dianne (Darryl), Jackie and Timmy; his sister, Zelma, her three adult children and their children, the two of four children of his sister, Doris an all of their children, his cousin, Dot her nieces and nephews, and Nancy Gibbs Carpenter and her family. The Timmons, Tuggles and Holmes are blessed to have a host of extended family members who shared their Annual Family Reunion for over 30 years. Lonnie was preceded in death by his wife, Mary, sister, Doris, Aunt Janie, niece and nephew, brother-in-law, Joseph Holmes, Sr. and all but one of the Belin Family Siblings.

Lonnie Timmons, Jr.'s life journey began in Pamplico, South Carolina on August 12, 1934. He was the son of the late Lonnie Timmons Sr. and Daisy Timmons Wilson. He was their middle child and only son. His close-knit sibling group included... View Obituary & Service Information

The family of Lonnie Timmons Jr. created this Life Tributes page to make it easy to share your memories.

Send flowers to the Timmons family.