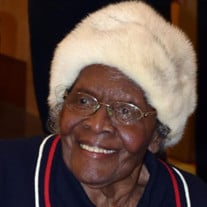 Lola Mae Davis, the third of ten children of Charlie and Woodie McClendon of Wilkes County, Georgia was born on April 12, 1919 and passed on to Glory on January 15, 2022. All of her siblings – Willie Thomas, Lawrence, Charlie Robert, Johnny Bunch, Claude Allen, Inell (Booker), Paul, Samuel and Marion preceded her passage to be with her Lord and Savior, Jesus Christ. In 1927, Lola Mae, as she is often called, gave her life to Christ – joining Trinity Baptist Church and becoming a Sunday School Teacher. Her love for Trinity Baptist Church will endure for more than ninety-five years and prior to her short illness, she was declared “Mother of Trinity Baptist Church” and enshrined forever in the legacy of her native church. She visited and worshipped at her beloved Trinity for the last time on November 7, 2021 where she enjoyed the embrace and admiration of all. On August 20, 1938, Lola was joined in holy matrimony to Clement Davis. From this union, four children were born - James (CJ), Clement Jr., Clarence and Evelyn. CJ passed shortly after birth and Clement Jr. passed on January 28, 2018. Clement Sr. was called home on July 17, 1996 after an eighteen-month battle with lung cancer. After the birth of Evelyn, Lola and Clem, seeking a better life beyond rural existence in northern Georgia, moved to Orlando, Florida with their three surviving children. In 1947, after her sister’s marriage and relocation to Baltimore, Lola and Clem migrated to Baltimore where she enhanced her education by attending night school at Paul Laurence Dunbar High School. She then attended St. Paul Nursing School in the evening while working days as a domestic. After graduating from St. Paul Nursing School (1949), she began a nursing career that spanned seven decades. During that time period, she will graduate from Seton Nursing School and secure her status as a Licensed Practical Nurse (LPN). For the greater part of her adult life, she will work two jobs to assure financial support for her children’s educational pursuits and her belief that each generation must leave wealth behind for the next. Despite the objection of her children, she worked into her mid-eighties. her dedication to family and work left little time for other endeavors. After the passing of her beloved husband in 1996, Lola, for the first time since moving to Baltimore in 1947, established a relationship with another church, St. Paul Baptist Church, under the leadership of Dr. Cleveland C. Alexander. She loved St. Paul and was proud to say, 'St. Paul is my church home." Beyond the addition of a church home in Baltimore, Lola adds to her family an adopted son, Dr. Donald Parker and a goddaughter Audrey Carter of Chicago. Katie M. Davis-Zellars, after graduating from Spellman, moved to Baltimore and became an educator in Baltimore City Public Schools to Baltimore and became an educator in Baltimore City Public Schools and more importantly a devoted daughter to Lola. There are a multitude of others who enjoyed Lola's love to include the family of many of her clients/patients - especially the Weikart Family - who, for more than 55 years, remain significant in all of Lola's Family activities. She extols the virtues of The Beryl Avenue-Luzerne-Kenwood Neighborhood Association which is led by the children of her former neighbors who refer to her as the "phenomenal lady." Lola leaves to mourn and cherish her memory: Clarence, Barbara, Evelyn; adopted son, Dr. Donald Parker (JoAnn); adopted daughter, Katie Davis-Zellars; goddaughter, Audrey J. Carter; grandchildren, Wayne (Dolores), Terrry (Larry), Cherylle, Dawn, Clement Rodney (Michelle), Clarence Robert, Kimberly (John), Vonita and Tigress (Wayne); twenty great-grandchildren, eighteen great-great-grandchildren; a host of nieces, nephews, cousins and extended family to include Evelyn's goddaughter, Raechelle (Steve) Merrick and Clarence's goddaughters, Sharnell Brown and Crystal Jackson-Parker.

Lola Mae Davis, the third of ten children of Charlie and Woodie McClendon of Wilkes County, Georgia was born on April 12, 1919 and passed on to Glory on January 15, 2022. All of her siblings &#8211; Willie Thomas, Lawrence, Charlie Robert,... View Obituary & Service Information

The family of Lola M. Davis created this Life Tributes page to make it easy to share your memories.

Lola Mae Davis, the third of ten children of Charlie and Woodie...