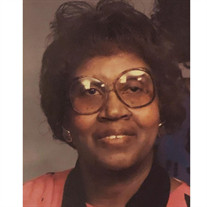 LOIS ROSETTE CLARK was born on October 9, 1933 in York, South Carolina. Lois was the youngest of twelve children born to the late Marie Youngblood Williams and Billy Williams, affectionately called Momma and Poppa. As a child, Lois was very precocious and was often found at her mother’s skirt in the kitchen. As the youngest, Lois enjoyed the doting favor of her parents and brothers and sisters. After finishing high school, Lois moved to New York City. She resided with a sister, Lena, who was often frequented by their brother Grady, sister Grace Renita (Nita) and nephew James (“J”) who also lived in New York City. While in New York, Lois met and married James Ezell Spencer. Lois relocated to Baltimore, Maryland in the 1950s. She moved in with Momma. The home represented 3 generations with Lois, her children, and Diane who was the granddaughter of Momma and niece of Lois who was raised like a daughter. Sometimes 4 generations lived in the house on a short term. Another granddaughter, Lerline, who was raised by Momma, would have to make home with her brood at Lois. Lois received her driver license, and was the first and only one among her sisters who learned to drive. Lois drove everyone everywhere from taking Diane to college at the then Maryland State to driving to New York and even North Carolina to visit in Kings Mountain. After a long courtship, Lois married James Clark. He predeceased her. Lois was gainfully employed by J.H. Filbert Company for more than 35 years. Lois was a conscientious and noted employee. She was able to secure jobs at the company for other family members and friends. Although she maintained an evening work schedule, Lois still found time to continue her domestic employment for many years. As a result, the families who employed Lois always took the time to remember her at holidays and special occasions with visits as well as gifts. Lois loved spending quality time with her family and hosting family gathers at her home. She loved cooking and cleaning her home. Lois was very particular when it came to her dress attire everything had to match perfectly. Lois was a very independent and enjoyed her life. As a Christian Believer, Lois was a dedicated member of the Gillis Memorial Christian Community Church for more than 40 years. She was involved in several ministries (Helping Hands Christians, Flower Circle, Women’s Chorus, Senior Choirs, No Caroline Christians Ministry, Radio Club, Pastor’s Aide, Communication Stewards), but was most notably committed in serving as a Deaconess. Lois was faithful in serving as Deaconess until the Lord Called her home. During her working years, and later as a retiree, Lois was concerned with stewardship in every aspect of her life for Christ. After a sudden, but brief illness, Lois transitioned from this life to her home in glory on Monday, March 29, 2021. Left to trust God to “turn this sorrow into joy” are: Lois’ grandchildren, Minister Mia (Deacon Anthony), Forrest Farrell Jr., (Toisha) Farrell; Theresa Spence; great grandson, Quintino (Kimberly) Rhodes, Forrest III.; great- great grandchildren, nieces, nephews, cousins and friends. Lois was preceded by her husband James; children Sarah, James and Arthur; parents Marie Y. and Billy Williams; siblings Lola, Willis (son), Lena, Ellaree, Hosea, Grady, Elizabeth, RuNell, Grace Renita (Nita), and Arthur Lee; nephew James (“J”); and nieces Lerline and Diane who were raised by Marie Y. and Billy Williams and her great-grandson Christopher Spence.

LOIS ROSETTE CLARK was born on October 9, 1933 in York, South Carolina. Lois was the youngest of twelve children born to the late Marie Youngblood Williams and Billy Williams, affectionately called Momma and Poppa. As a child, Lois was very... View Obituary & Service Information

The family of Lois Rozette Clark created this Life Tributes page to make it easy to share your memories.

Send flowers to the Clark family.