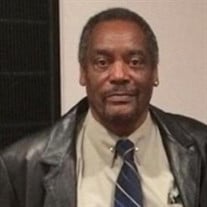 LLOYD PALMER was born along side his twin brother, Floyd, on January 21, 1951 to Geneva Tucker (Caldwell) and Lorenzo Palmer. Lloyd was educated in Baltimore City Public School System and attended THE Baltimore City College High School. After learning many skills, he worked at Oles Envelope Co. until 2007. In his adulthood, he produced three children: Vonda Thomas, Kevin Palmer and Kierra Palmer (Watson). Lloyd was known around the neighborhood for his sometimes scary demeanor, driving his Jeep, his love for jazz music and going to the Hampton Jazz Festival annually with the love of his life, Barbara Neal. He was preceded in death by his mother Geneva Caldwell, his dad Lorenzo Palmer, his stepdad Lawrence Caldwell, his brothers Vernell Palmer, Floyd Palmer, and Larry Caldwell, his sister Genese Caldwell, and his grandson Matthew Thomas Lloyd is survived by: his lifetime partner, Barbara Neal; his children, Vonda Thomas, Kevin Palmer and Kierra Watson; his brothers, Lionel Caldwell and Vincent Caldwell; son-in-law, Niajel Watson; his grandchildren, Kevin Clark, Kelsey Clark, Will Palmer, Kaylah Palmer and Zuri Watson; his great-grandchildren, Arya Autumn and Lana Snow Wakefeld; and a host of nieces, nephews and friends

The family of Lloyd Palmer created this Life Tributes page to make it easy to share your memories.

LLOYD PALMER was born along side his twin brother, Floyd, on...

Send flowers to the Palmer family.