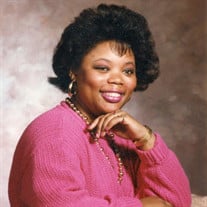 Lisa Danita Cotman, 55 of Highland Springs entered into eternal rest on February 4, 2022. Lisa was the second oldest and had a heart that was big and opened. She was an awesome sister, a wonderful mother, and a terrific daughter. At an early age, she played clarinet, a skill she learned when she attended Robert Fulton elementary school. She was also an avid roller skater and enjoyed nights at Skate Land on Williamsburg Road. Lisa talked to her mother everyday, at times seeming like it would be for the entire day. She shared a lot of adventures with her cousins, family, and friends from going to Pennsylvania and eating on Cotman Boulevard, to seeing Prince in concert, to the numerous trips to Buckroe Beach as a little girl. She was baptized at Rising Mt. Zion Baptist Church and later became a member of St. John Baptist Church in Charles City, VA. Lisa was a fighter. Whether it was for her sisters or when she needed a kidney and our sister Felicia unselfishly gave her one of hers. Was she perfect, no she loved the Cowboys her only fault. Lisa loved her boys there was nothing she wouldn't do for them and nothing she wouldn't sacrifice for them, they are her biggest achievement. From attending little league games and practices to multiple trips back and forth to their colleges. Lisa worked at Byrd Airport now Richmond International Airport while attending Varina High School. She worked for more than two decades at Bank of America, with her current job being "K" Line America. Lisa leaves to cherish her memory her sons Darian and Darius Cotman, who she loved to no end. Her parents Marian and John Cotman, her sisters Sandie and Felicia Cotman, Nina Cotman Pollard (Darryl), Jodie Robinson, and Jaime Adkins Dabney. Aunts, uncles, nieces (2 devoted Ashley and Paris), nephews, cousins, and a host of other relatives and friends. To know her is to love her would be an understatement. We will miss her beyond measure.

Lisa Danita Cotman, 55 of Highland Springs entered into eternal rest on February 4, 2022. Lisa was the second oldest and had a heart that was big and opened. She was an awesome sister, a wonderful mother, and a terrific daughter. At an early... View Obituary & Service Information

The family of Lisa Danita Cotman created this Life Tributes page to make it easy to share your memories.

Send flowers to the Cotman family.