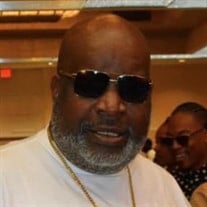 Linwood Big Man Vaughan was born February 19, 1971, in Richmond, Virginia to Linwood Scott Sr. and Juanita Brown. He has educated in the Richmond Public School System and graduated class of '89 from Armstrong High School. He was a faithful employee at Republic Services solid waste collection company. He was preceded in death by his step-father Willie Brown, Grandfather Linwood Baylor, Grandmothers Clarice Starke, Helen Vaughan, and Blanche Stott, and Aunt Josephine Starke. Big Man was a gentle giant with a loving and friendly personality to all. He could be found bowling (various bowling leagues, skating (VA Skate Connection where he was a proud co-founder) and his all-time favorite pass time DJ'ing 'DJ Big Man". He was a pass member of 'The Railroad Club,' and a very generous person who supported his community at every chance he got. He loved to travel, and spend quality time with his family and friends during his Sunday Dinners and annual cookouts/ fish fry's. His cars was his prize possession. He loved sports and was a "Pittsburgh Steeler's" fan. At any given time you would always catch the television on a sport channel, wrestling or his favorite show "Matlock." While many may have called Linwood 'Big Man' to his immediate family he was known as Diddy because "DIDDY DID IT ALL." He was a devoted father, son, brother, nephew, and friend. You could always count on him to provide a shoulder to lean on and an ear to listen. He was a philosophical person who was best known for his sayings. He had a very special way of passing on his knowledge and gave the greatest advice you could ask for. He leaves to cherish his memories his devoted sons, Linwood Vaughan, Jr. and LeSaune Vaughan; step-children, Gary Smith (Lynnecha), ShaNika Kidd (Emmanuel), and Corey Portee; mother, Juanita Brown, father Linwood Scott, Sr. ( Deborah); siblings Linwood Scott, Jr. (Kellye), LaToya Ford (William) and Tiffany Brown, devoted aunts, Olivia Adams, Thelma Scott, Consuela Forbes, and Dorothy Mayo, grandchildren; Ga`Nard, Ga`Lani, Ga'Laiah Smith,Geremiah Johnson, Kaylee, Tyler-Lee and Kase Vaughan, Jonah-Lee and Kaydence Kidd, cousin; Dikicia Vaughan,Godkids; Skyy and Josiah Robinson, devoted friend; Lenora Wyche, honorary family members; Diane Banks, Viola Roinson, Kevin Taylor, Javon Robinson,Ebonny Robinson, and Matoaka Berry, and a host of well-loved family members and friends.

Linwood Big Man Vaughan was born February 19, 1971, in Richmond, Virginia to Linwood Scott Sr. and Juanita Brown. He has educated in the Richmond Public School System and graduated class of '89 from Armstrong High School. He was a faithful employee... View Obituary & Service Information

The family of Linwood Maurice Vaughan Sr. created this Life Tributes page to make it easy to share your memories.

Send flowers to the Vaughan family.