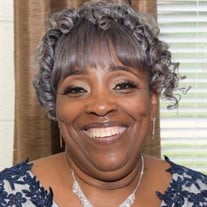 Linda Deon Ward peacefully departed this life and entered her heav­ enly home on Saturday, October 23, 2021. She was preceded in death by her father, Frank Starke, and sister, Julia Starke. Accepting Christ as her Lord and Savior at an early age, she was bap­tized at Pilgrim Journey Baptist Church. Later, she rededicated her life to the Lord and became a faithful, active member at Manna Christian Fellow­ship Church. Linda was educated In the public schools in Henrico, Virginia, and remained friendly with several of her classmates from Hermitage High School. As a student, Linda was a part of the pep club, generating much enthusiasm for the sports teams. Upon graduation in 1972, Linda began working for General Electric, where she spent some years as a circuit board inspector. She then went on to work for AT&T. Her work ethic and record of service were impeccable. She then decided to return to school, studying at J. Sargeant Reynolds Community College where she received an Associate Degree in Architec­tural Drafting. Although Linda enjoyed the work world; she knew there was a higher calling on her life. While at AT&T, she was part of a Bible study that reinforced that higher calling and caused her to take action to cultivate that call. During her membership at Pilgrim Journey Baptist Church as an adult, Linda served as an active and creative teacher in the Sunday School Program. Linda would not only teach the youth classes but provided a model for new teachers aspiring to be part of the church's Sunday School Program. Naturally her own children, Corey and Scherra, regularly attened­ all youth-related activities;,she also,encouraged community youngsters and other youth, to attend church. In addition to being an integral part of the planning and operation of the Sunday School Program,she taught and worked with the youth in the Summer Vacation Bible School Program. God smiled on Linda with an anointed gift of cooking and she used her cooking skills in various fund-raising projects for the church. For the inaugural Youth Revival at Pilgram Journey, Linda played a crucial role in developing, planning, and overseeing that successful event. In addition to the Youth ministry, Linda was an active member of the Pilgrim Journey Baptist Adult Choir. She was not too busy to to contribute meaningfully during church meetings and attend Bible Study,without suprise she was involed in developing and organizing a home bible study and prayer group. Linda was a diligent and dedicated, church worker in every,aspect in which she contributed. After a six monfh courtship with Jesse Ward, Linda married her best friend in August 1987. Corey and Scherra were already the lights of her life. In addition, their union was blessed with two daughters, Shannon and Scha­ nea, as well as a son, Tommelik. Her family grew to include sons-in-law and grandchildren, Her leadership skills which were honed at Pilgrim Journey were readily offered at Manna Christian Fellowship, where her heart of devotion, dependability, and steadfastness were apparent. There is no facet of ministry at Manna in which Linda's presence was not felt. On one of the last Sundays that she was able to attend service, she lifted her voice in joyful praise during the postlude/benedictory song. Shortly offer joining Manna Christian fellowship in 1987 Linda became a member of the Intercessory Prayer learn. Along with her husband, Elder Jesse Ward, they took the helm of the Intercessory Prayer team in the mid-1990's. Linda first felt the call lo overseas missions in the early 1990's. Her vision was that future missions would include the whole family, The first missions trip she took was in 1993 to Saini Lucia, with her husband and youngest infant daughter, Schanea. Future missions trips included South Africa, France and Nicaragua. From Nicaragua, lasting relationships were formed, as Linda coordinated multiple trips to the country. She and Jesse included both Shannon and Schanea on those journeys. Outreach to the inner cities was Linda's first outreach. Under the tutelage of Mother Isabel Tindall, she went to various areas of the city, street evan­gelizing, even while expecting or with a stroller in tow, preaching the Gospel and forming lasting relationships with the residents. Many young ladies at Manna and in the Richmond community benefited from Linda's prayers, energy, and time. During the week, Linda could be located at Manna in the church office in her role as church administrator. After becoming the accountant in 1995, Linda spent many late nights in training, learning the software and the programs needed to run systems effectively. When the Master's Touch ministry occasionally required a driver for picking up the necessary food items for distribution to others in the commu­nity, Linda drove the large truck to perform that task, even though she could barely see over the steering wheel. One of her latest joys was her involve­ment with the Married Couples' ministry. She was, always prepared with meaningful lessons for all in attendance. Linda was a true servant of the Lord Almighty, There was no doubt that she lived her life in submission to Him. She was devoted to her family, her fellow church members, and her neighbors. She was never too busy to lend a hand to those in need. Her love of cooking and others' love for her delicious dishes of an kinds will always be fondly remembered - and missed.

Linda Deon Ward peacefully departed this life and entered her heav­ enly home on Saturday, October 23, 2021. She was preceded in death by her father, Frank Starke, and sister, Julia Starke. Accepting Christ as her Lord and Savior at an early... View Obituary & Service Information

The family of Linda Deon Ward created this Life Tributes page to make it easy to share your memories.

Linda Deon Ward peacefully departed this life and entered her...

Send flowers to the Ward family.