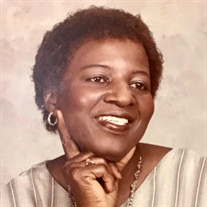 Obituary Lillie Mae McClary Lillie Mae Mcclary was a loving and devoted wife, military spouse, mother, grandmother, aunt, sister, foster parent, and friend. She departed this life and gained her wings on January 30, 2022. She was 87 years old. She was born on October 23, 1931, to the late Walter and Edith Hayward in Greeleyville, South Carolina and attended Kingstree High School. She was preceded in death by her sister, Albertha Lumpldn, and her brother Roosevelt "Buddy" Hayward. Lillie Mae was baptized as a child at the St. John's Baptist Church in Kingstree, SC. She married Henry McClary, Jr. on March 17, 1955, and is survived by five children: Christine Mcclary, Curtis McClary, Cynthia Scott, Celeste Logan (Joseph), and Sean McClary; thirteen grandchildren, Eric and Calvin Mcclary; Curtis and Alexia McClary; Lauryn Scott, Tome Martin (Daniel); and Joseph, Jahem, Joelle, Jolie, Jameson, Joy and EnNaja Logan; four great-grandchildren: Molique and Devontae Bryant, Janiyah McClary and Flynn Martin; four great-great-grandchildren; Ava, Ayden, Nevaeh, and Ahmir Bryant, devoted sister-in-law Geneva Hayward, friend and caregiver Barbara Moody, and many relatives and friends. In addition to her love for her family, over the years she opened her heart and home to over twenty foster care children. She was a master seamstress, avid gardener, and an amazing cook who could transform any ingredients into a tasty meal. You only live once and if you do it right that's enough. For Lillie Mae life was a journey filled with wanderlust and adventure. While the family was stationed in Germany, she was able to travel to France, Italy, and Switzerland. And if that wasn't enough, in her later years she traveled with her daughter to Germany, France, Poland and the Netherlands. Lillie Mae became part of Virginia surface transit history in 1971 being one of the first women bus operators hired by the Alexandria, Bancroft, and Washington Transit Authority (AB&W), known today as Metro. She was the fit model for the new Metro women's uniform. In 1973, she modeled the new Metro women's uniform for the unveiling to the Board of Directors and to the public for the newly formed Washington Metropolita-n Area Transit Authority (WMATA). Lillie Mae was truly a "Go Getter" and will be remember as such. Whether it was telling her children to go get her purse, telling those entrusted in her care to go get a job or an education, or going to get "it" herself to make the life of her family, friends, and strangers fulfilling and enriched.

The family of Lillie Mae McClary created this Life Tributes page to make it easy to share your memories.

Lillie Mae Mcclary was a loving...

Send flowers to the McClary family.