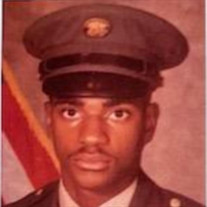 On Saturday, May 29, 2021, after 1:00 p.m., Flight 271960 departed on an express route to Heaven. Waiting at the gate were two angels, Rachel and Elsie singing, “I’m Waiting for My Child to Come Home”. LEONARD ERIC ROSS, affectionately known as Doubie or Lenny to his family and friends, was born on February 7, 1960 to the late Elsie Anna Ross and James Lassiter. He was the youngest of ten children and was raised with the loving care of his grandmother Rachel Lee Ross, godparents, Sylvester Moses (Babe) and Walter Fitzgerald (Cherry). Destination Heaven was like a partial Family Reunion. All who had gone before him were present, his brothers William Ross, Melvin Lassiter, Larry Lassiter, Lazarus Lassiter (Crummy) and sister Rosemarie Ross. Leonard was educated in the Baltimore City Public School System. He attended Johnston Square Elementary School #16, Lombard High School #57 and graduated from the prestigious Baltimore City College in 1978. That same year, Leonard took the oath and joined the United States Army where he served his country for many years. During that time, he developed a love for traveling all over the country and state to state. Out of the blue, he’d call saying, “Just want you to know I’m going on a trip. “Don’t worry about me.” When he could no longer travel state to state, he made reservations at luxury hotels for 3 to 4 days at a time throughout the year. Leonard was very intellectual and could converse on any topic. As a child, he loved reading comic books and lying on the floor drawing superheros as he watched his favorite TV Shows such as Speed Racer as we all sang, “Go Speed Racer, Go Speed Racer, Go Speed Racer Go.” Leonard had a devilish smile. He was fly with swag and could sport a bright colored suit with Stacey Adams as he listened and sang to the beats of his favorite group, Funkadelic Parliament featuring Bootsy Collins preparing to land on the Mothership. Leonard sang loud because he knew the words. In later years, Leonard focused more on his spiritual growth, studying, and reading the bible, attending a local church as well as listening to Joyce Meyers and TD Jakes. His music of choice grew to include another favorite, “He Saw the Best in Me.” Obituary Order of Service Leonard had a great love and generous spirit towards his Family. He had numerous friends and will be missed by all. “To be absent from the body is to be present with the Lord.” The memory of Leonard will always be present in the hearts of: his brother, James Lassiter (Ruby); three sisters, Janet Lassiter (James), Paulette Brown (Suffolk, Va) and Rosemary Ross; nephews, Eric, Michael, Marquis, Quentin, Eric, Kendall, Kenard, Daniel, Sean, Noah, Dwayne and Quentrell; nieces, Shynea (Dwayne), Apache, Janella, Danielle, Nanekia, Darica, Shakeira, Quanteria, Brionna, Couture, Lotus, La’Mour and Aziyra; two uncles, Robert (Frances), George Ross and Russell Lassiter (Suffolk); two aunts, Mary RossCalhoun (Arrington, Va) and Florence Brown; a devoted cousin, Patrice Ross-Johns; and a host of other relatives and friends.

The family of Leonard Ross created this Life Tributes page to make it easy to share your memories.

Send flowers to the Ross family.