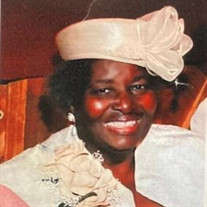 Lelia Mae Briggs was born on October 10, 1935 Williamsburg County, South Carolina. Born the “Nee Baby” of seven children to the late Sylvester Briggs and Sarah Frazier-Briggs. Lelia accepted the Lord as her Savior, at an early age, on the mourner’s bench at Zion Methodist Church in South Carolina. Upon moving to Baltimore, Maryland, she joined Memorial Baptist Church Street under the leadership of the late Rev. Agnes Smith. There she was baptized and served on several ministries for 17 years in 1974, she joined with New Unity Baptist Church under the leadership of the late Rev. James S. Williams. There she remained until her death, under the leadership of Rev. Johnny N. Golden, Sr. Lelia received her education from Warsaw Elementary School, which she attended through the 10th grade. After moving to Baltimore, Maryland in November of 1955. Lelia continued her education by attending night classes for Nursing at Dunbar High School. She also received a certificate for completing Sewing Classes, finally. Completing her schooling with a GED. Lelia was united in Holy Matrimony on March 9, 1963 to the late Walter Allen Carter. To this union 2 daughters were born one who has preceded her in death, Valerie Carter Giggers. Lelia was employed by St. Joseph Hospital for 8 years John Hopkins school of Hygiene for 5 years and The Baltimore City Public School System for 13 years before retiring in 1986. Affectionally known in her neighborhood as Mrs. Carter. Anyone passing through the 2500 block of Robb Street knew to look on the porch of 2535 and there you would find her from sun up, to sun down. No matter the occasion, so many persons could find their mailbox filled with cards from Lelia. she had a passion for sending cards. Lelia departed this life peacefully on Wednesday, January 19, 2022 Those left to cherish her precious memories are Daughter, Angela. 6 grandchildren; Jusin, Nicholas, Jessia, Tyler, Aaron and Taylor. 4 great grandchildren; Christian, Jayla, Camyn and Nasir, 1 sister, Lucille Graham, 1 sister-in-law; Dorothy Briggs, 1 son-in-law; Walter Giggers. 2 God sons; Roy Harrison and Dennis Johnson. A host of nieces, nephews and friends. Her long time, dear friend, Essie Peoples.

The family of Lelia Mae Carter created this Life Tributes page to make it easy to share your memories.