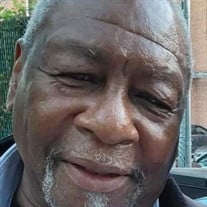 LEAK VANLANDINGHAM, affectionately known as “Junior”, son of the late Doris Elizabeth Vanlandingham, was born on October 3, 1943 in Baltimore, Maryland. On April 22, 2022 the Heavenly Angels called him home to rest. Leak received his early education through the Baltimore City Public School System, where he graduated from Frederick Douglass High School in 1962. In February 1963, he was joined in holy matrimony to Delores Joseph. To this union were born two sons, Reginald and Jeffrey. Leak joined the Baltimore City Police Department in 1968 and continued his police career until he retired after 28 years of dedicated service. After retirement, he began working as a bailiff for the District Court of Baltimore City where he remained until his passing. Leak was a strong-willed individual who was fiercely independent, setting his own goals and accomplishments in life. He loved to cook, especially for family and friends, which led him to starting his very own catering business called Van’s Catering. He was always there to help others when needed. Preceding him in death were two sons, Reginald and Jeffrey Vanlandingham. Also, several other family members and friends that are gone, but not forgotten. Leak leaves to cherish his memory: his loving wife of 59 years, Delores; two sons, Julian and Justin; one daughter-in-law, Victoria; four grandchildren, Jeffrey Jr., Keith, Devin and Noah; five great-grandchildren; two sisters, Jennie and Jackie; and a host of other relatives and friends that cherished him dearly.

The family of Leak Vanlandingham created this Life Tributes page to make it easy to share your memories.

Send flowers to the Vanlandingham family.