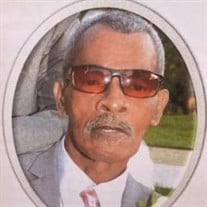 Lawrence Thomas Day, son of the late Albert and Susie Day,was born on July 8,1950 in St.Mary's County, Maryland. He was called home to glory after succumbing to a lengthy illness. "Lima Bean" as he was affectionately called attended Holy Angels Church in Avenue, Maryland where he was baptized as a young child. He acquired his name because of his his Momma's lima beans and biscuits. He attended Baltimore City Public Schools and went on to receive his certificate in Job Corp, later becoming a Certified Welder for Bethlehem Steel Poet Authority. Later on, he decided to relocate to Apex, NC where he continued his work as a Welder. Lawrence was a distinguished gentleman who love spending time with his family. He also enjoyed playing cards, hunting and dancing. He had a affinity for fashion and loved the opportunity to paint the town red with his brother David they became known as "Crockett and Tubbs". He enjoyed traveling to St. Mary's County to spend time with his family. Lawrence was blessed with a beautiful daughter, Mardrella Day. Later, he was united in holy matrimony to Marion Elizabeth Fain. They were blessed with a son, Lawrence Ramon "Mone" Day. As his health stated to deteriorate, there were numerous people who helped in his care-especially his son Mone, sister Linda, Cill, Patty, Sean and his nephew Lamar. he departed this life on Thursday,July 1,2021, after a lengthy illness. He leaves behind to mourn his children, Mardrella Day-Jones (Eric Jones); Lawrence Day(Tynisha Day), eight grandchildren, Erica and Shaun Jones; Dequan, Se'Mone, Ramon, Quichey, Destiny, and Morgan Day; two great grandchildren, Kameron and Milian; four sisters, Dorothy Horton Brown(Jay), Linda Day, Risa Day-Chavez(Michael), Angela Day-Scott(Kevin); two Brothers, David and Mark Day; two Sister-in-laws Sandra and Tina Day; a host of nieces and nephews and cousins. He was preceded in death by sisters, Patricia, Hilda, Jacqueline, Charlene,and brothers George, Wayne and Andre Day. Lawrence lived full life and will be missed by so many.

Lawrence Thomas Day, son of the late Albert and Susie Day,was born on July 8,1950 in St.Mary's County, Maryland. He was called home to glory after succumbing to a lengthy illness. "Lima Bean" as he was affectionately called attended Holy Angels... View Obituary & Service Information

The family of Lawrence Thomas Day created this Life Tributes page to make it easy to share your memories.

Send flowers to the Day family.